I headed to Christ the Redeemer statue on the afternoon of the world cup final having thought the queues would be short; I soon saw that what seemed like a majority of the tourists in Rio had also had the same idea. The queues were very big and the statue very packed! 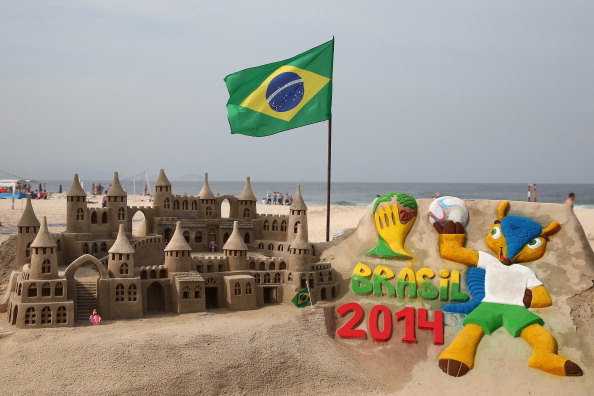 I had just enough time to see everything I wanted at the statue then I had to hastily head to Copacabana beach for the final. The queue down from the statue was also very hefty but fortunately having a return ticket for the passenger van allowed me to skip a chunk of the queue. More can be read about my Christ the Redeemer experience here.

The atmosphere was hotting up and people were getting excited, the video below is of an Argentine party bus that drove past us.

I was heading to the game with a few people I had met in one of the queues; we got a bus for part of the journey and a taxi for the rest to Copacabana beach. We asked the taxi to go faster as we only had 5 minutes before the game started; this led to the taxi driver driving on the pavement and through a red light! 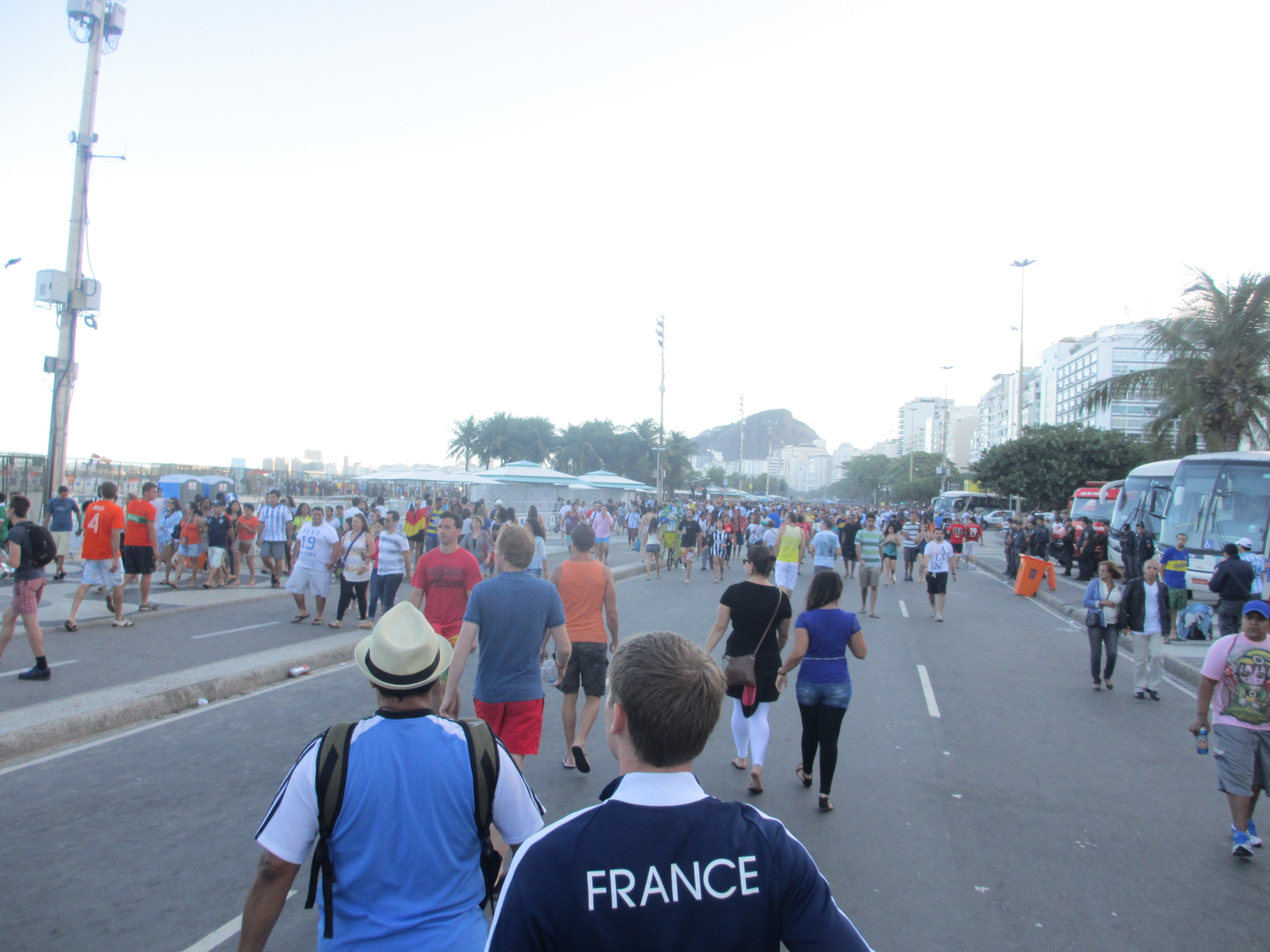 Racing to Copacabana with just minutes before the game started

We had decided to watch the Germany v Argentina world cup game on the beach beside the Fan Fest where we could easily see the big screen that was within the Fast Fest arena. The Fan Fest was a massive arena which could hold 20,000 people on Copacabana beach. We didn’t go there as it was likely to be full by the time we got there but it was also well-known for pickpocketing and violence. 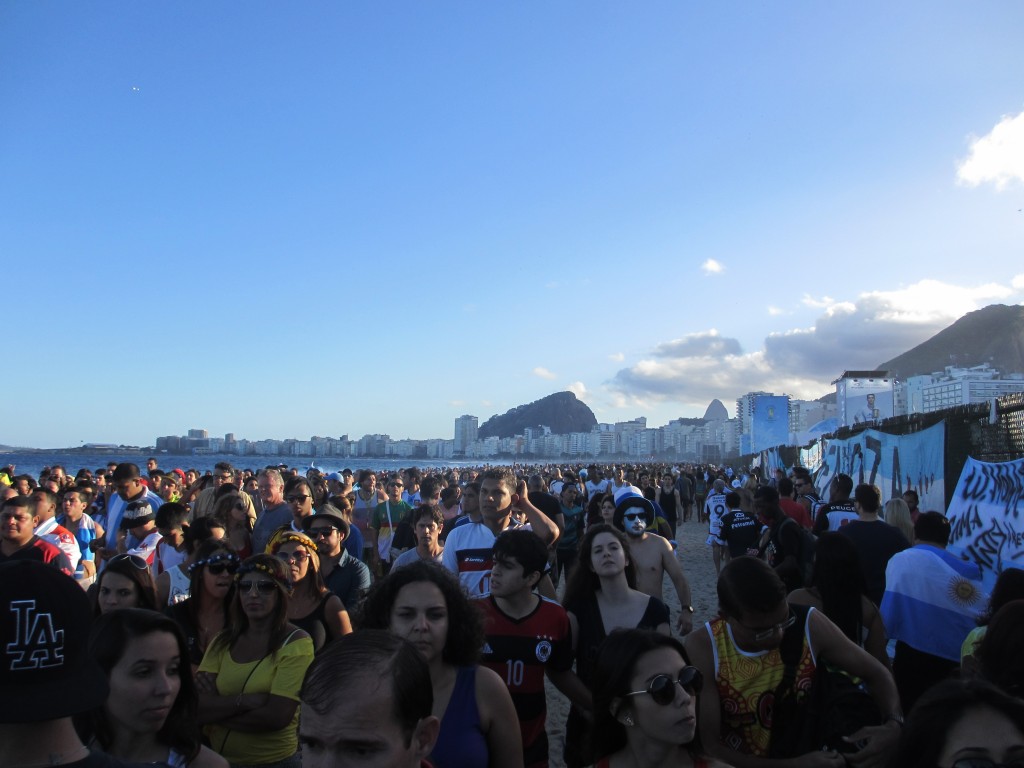 The beach was packed with thousands of people, the alcohol was flowing and it was a really good atmosphere. We walked through the densely packed crowds for a little while to find a position with a great view of the screen and proceeded to watch the game, just a few minutes after it had started. Below is a short video pan of the beach.

Part way through the game a Helicopter swooped in above the sea just next to us. It turned out someone had got caught up in the strong currents and needed some help, a net dropped from the helicopter and a life guard dived in. The next thing we saw was the Helicopter rising up with two people hanging below in the net, one looked relaxed and the other slightly larger one was cheering to the crowd which lead to a huge cheer from everyone watching the drama unfold. 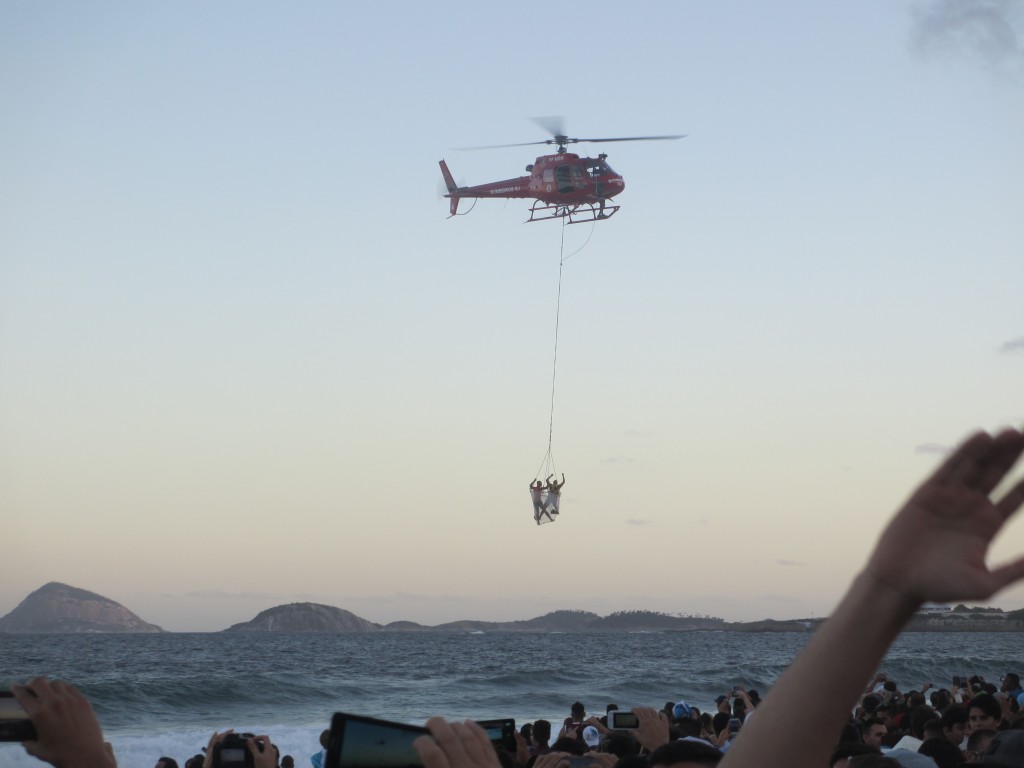 Helicopter rescue during the game

The atmosphere got tense later on in the game when the Argentinians which made up a majority of the crowd realised they weren’t going to win. At one point a load of people started running in one direction which I soon saw was because of a wave of pushing coming from the other direction. 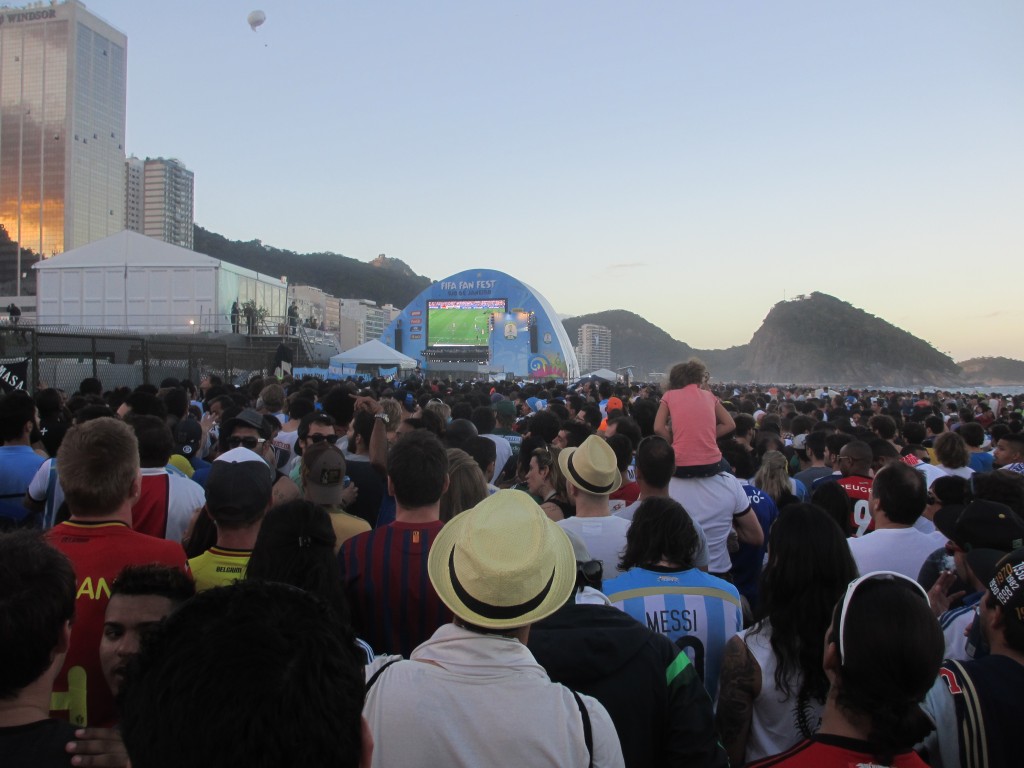 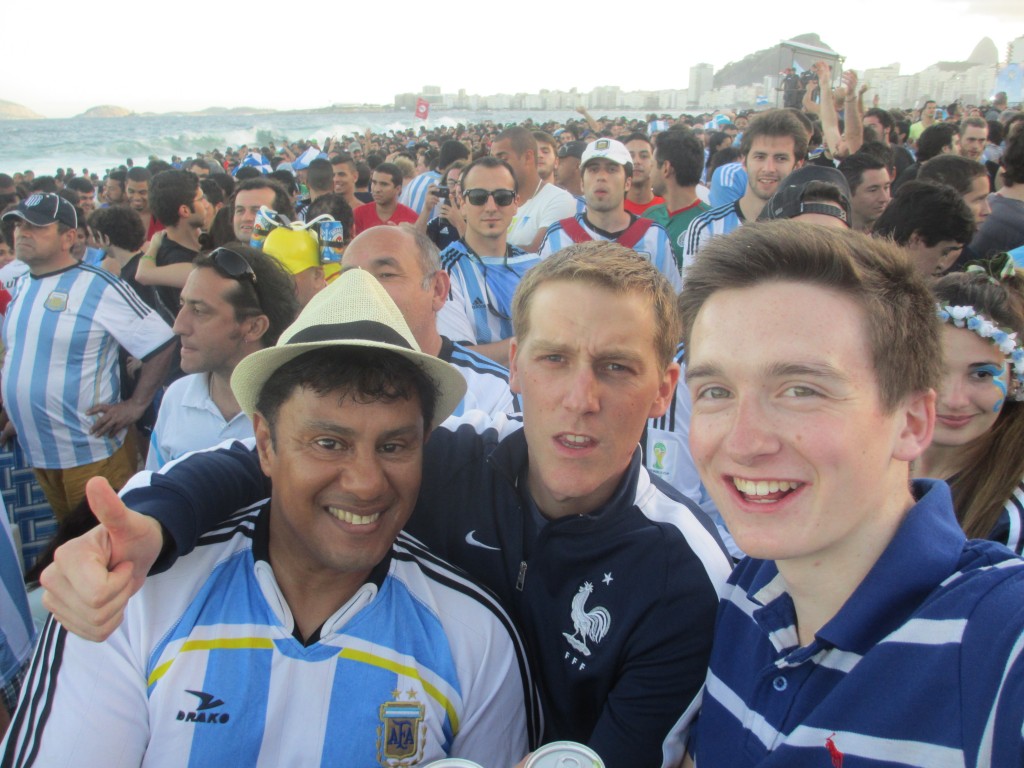 The cheer was relatively quiet when Germany won as there weren’t many Germans nearby; we got out as soon as the game ended as the atmosphere was so tense. I heard stories from people who stayed longer about fights breaking out, many bottles being thrown and even a few English people were beaten up by Argentinians who are angry about the British ownership of the Falkland Islands. 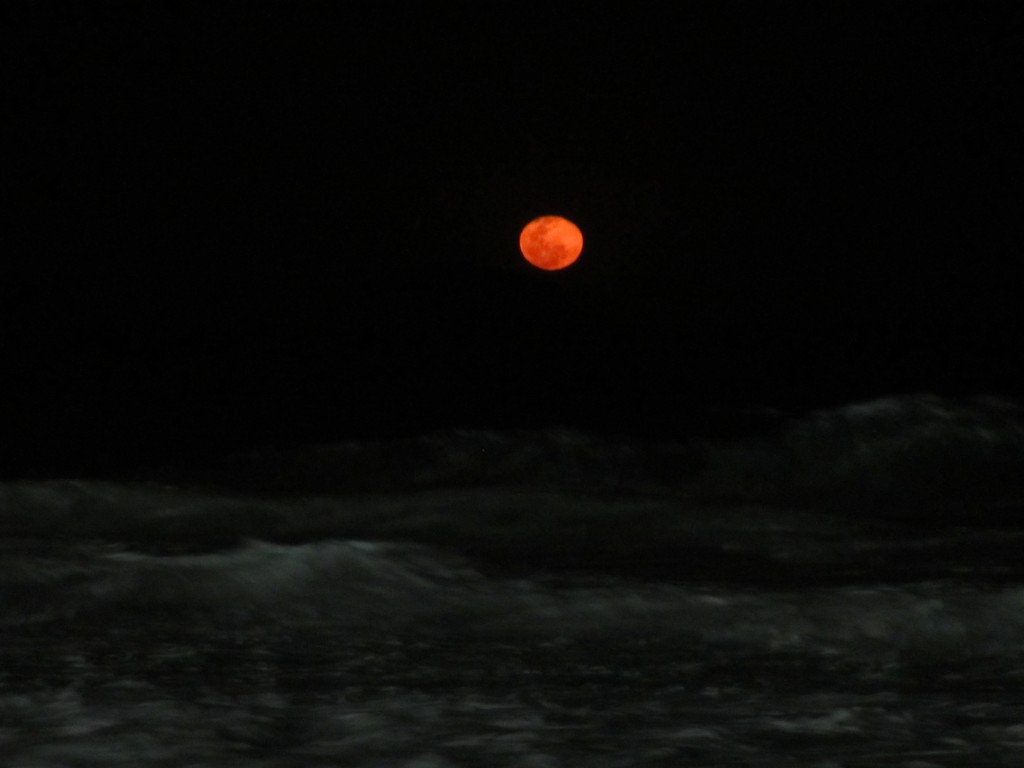 From Copacabana beach we headed to the clubbing district called Lapa where we first had dinner then joined in the nights festivities. As the night went on the whole of the main street of Lapa filled up with people forming a massive street party. Street sellers were walking round with cheap drinks and everyone seemed jolly, even the Argentinians! 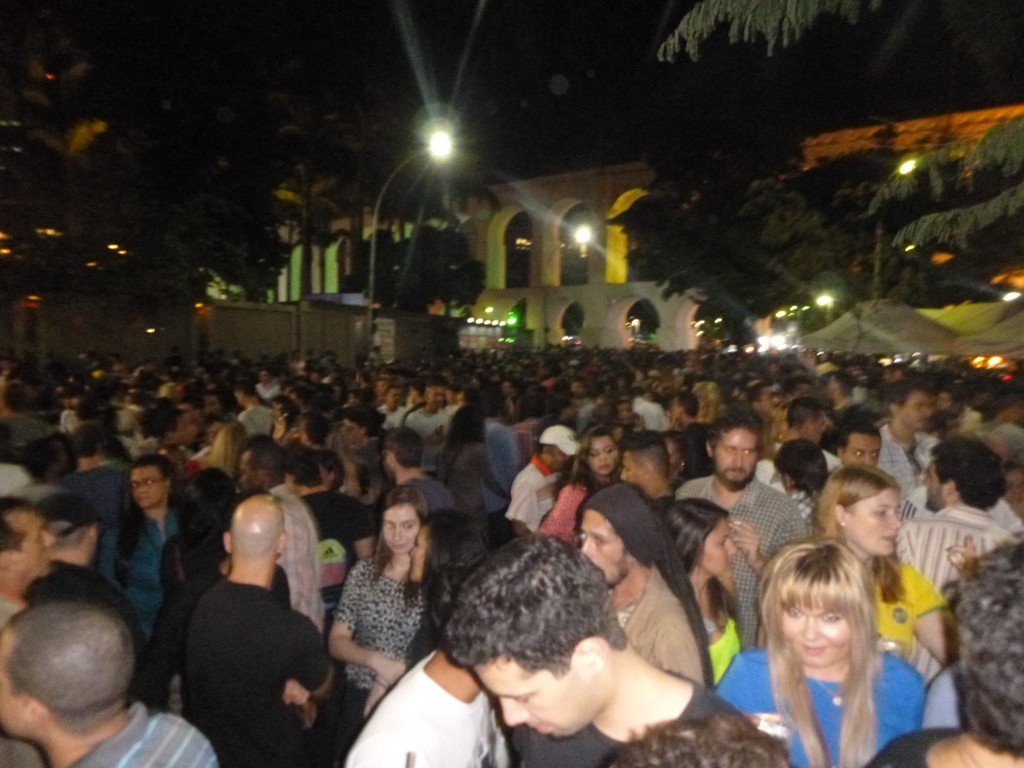