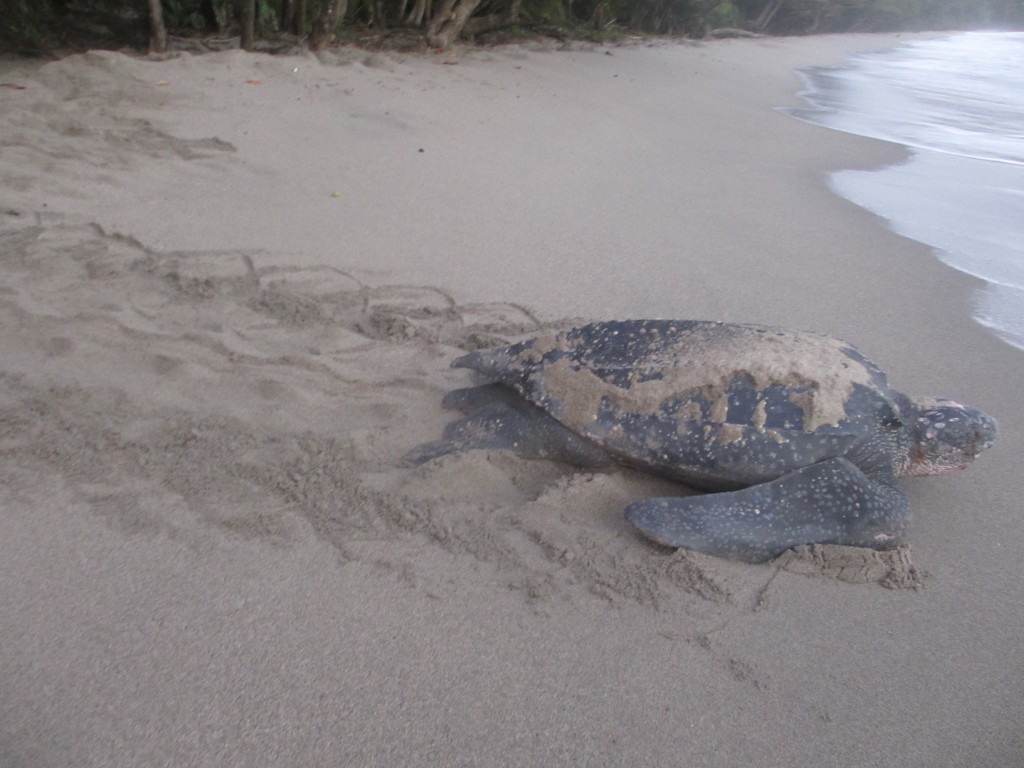 I had been staying in the Port of Spain with family relations; for my last weekend in Trinidad we headed to the North East coast with the plan to see some Leatherback Turtles! The scenery along the way was interesting; we popped into a turtle centre part way through the journey where they had a few different kinds of turtles that had been injured in the nearby area. They also had a number of other animals like Macaws and Monkeys. 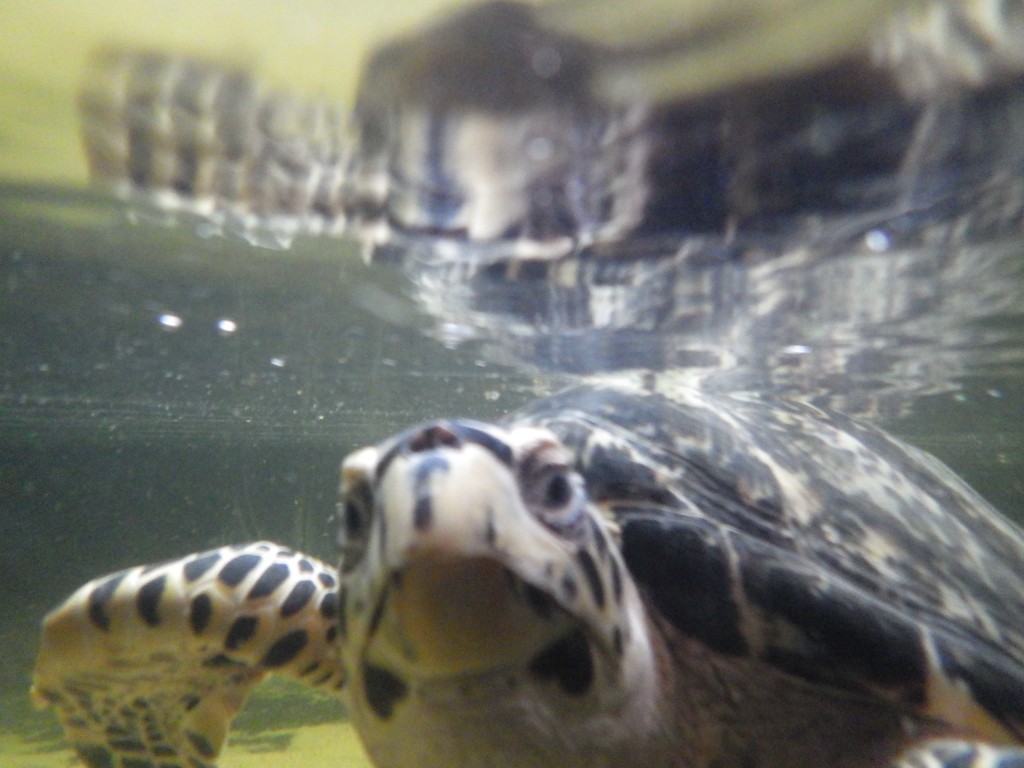 After about three hours of driving and lots of winding roads around the coast, we arrived at Grand Riviere. Grand Riviere is well known for the abundance of Leatherback Turtles that frequent its beaches every night. We were staying at a hotel called Mt Plaisir Estate Hotel for the weekend which was right next to the beach and just metres from the sea!

I was staying in a very grand room for the weekend with a large balcony, looking out to sea. The balconies of the rooms were all connected up which was really good as my relations and a number of their friends were all staying in rooms adjacent to one another. 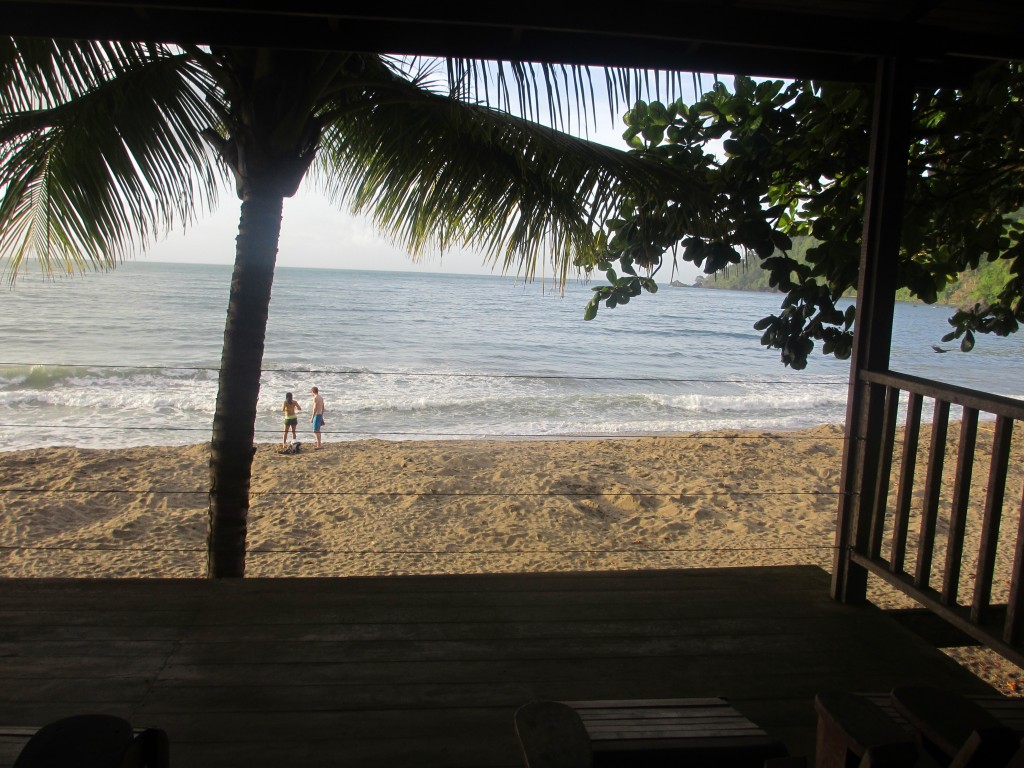 View from the room

It was dusk by the time we were all checked in and heading for dinner at the hotel restaurant. It was at the dinner table when I got my first sighting of a turtle!

Baby turtles tended to hatch around dusk and once hatched, they would head towards light … and this night a number of baby turtles had decided to head to the light of the restaurant. They were quickly spotted and all the children (and me) picked them up and took them down to the sea where they promptly pushed themselves in and swam off. There had been lots of measures across this coast line to reduce the light visible from the sea so turtles didn’t get confused, red lights could be used, as turtles can’t see red light. The restaurant had tried to restrict their light presence but obviously not quite enough; I think the main reason the turtles had gone to the restaurant was because they had hatched so close. 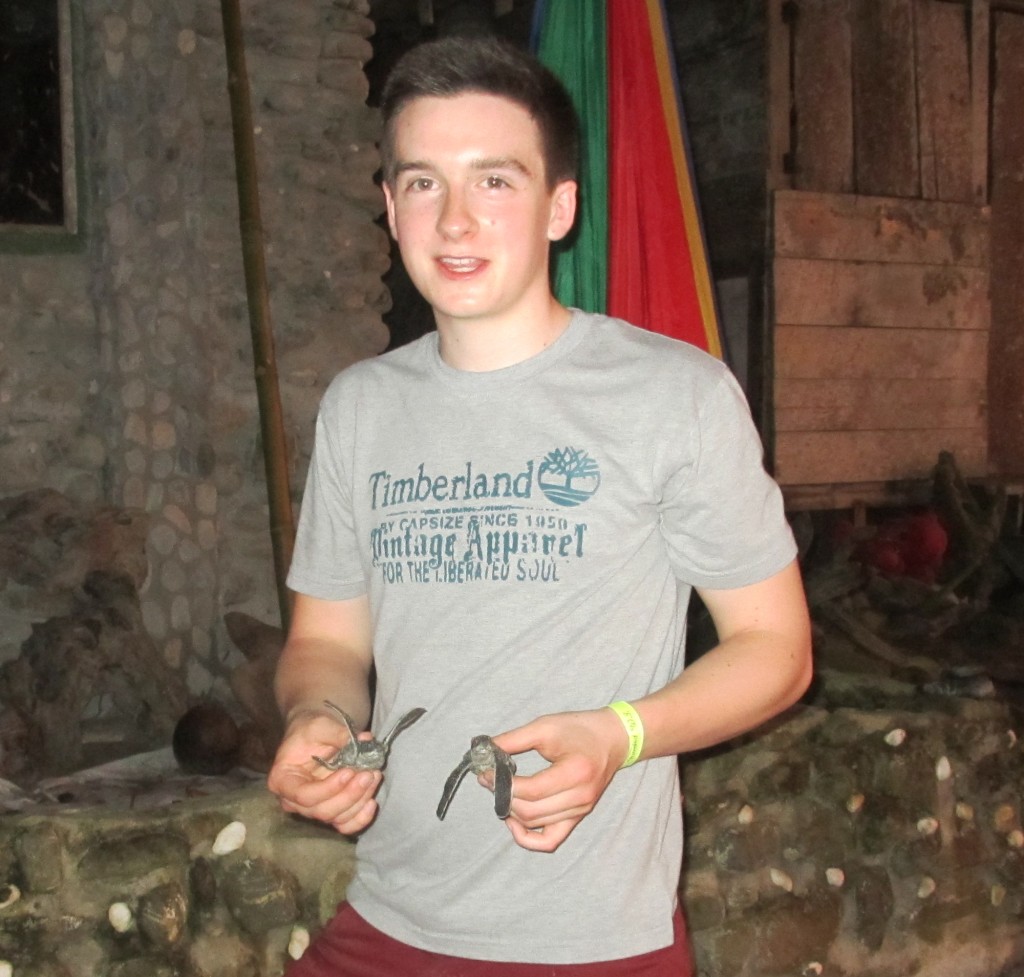 We had arranged to be taken on a tour once it got a bit darker; no one was allowed to go on the beach after a certain time without a tour guide. First we were shown a short video about the turtles and their conservation and then we were taken out onto the beach. It was then when I came to terms with quite how many turtles inhabit the beach every night, shining my red light about I could see these huge beasts everywhere. Our tour guide told us that around 300 turtles go onto this relatively small stretch of beach every night!

We saw how the turtles pull themselves up the beach and then upon finding a suitable place, use their back flippers to dig deep holes in the sand for laying eggs. I was impressed with how deep they managed to dig holes; I saw a number of turtles accidentally digging up other turtle nests because so many of them lay on this small stretch of beach. This can’t help the statistic we were told by our guide that 1 in every 1000 baby Leatherback turtles live to adulthood! 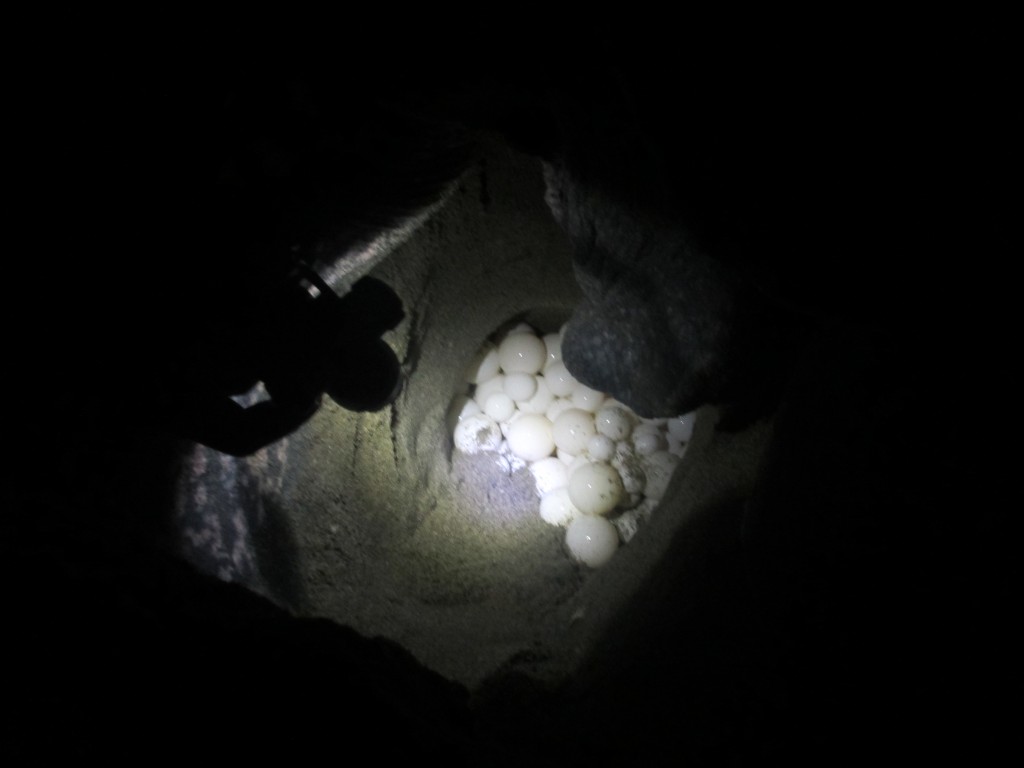 We witnessed lots of turtles laying eggs and were even able to touch them while they were laying as they go into a trance like state. 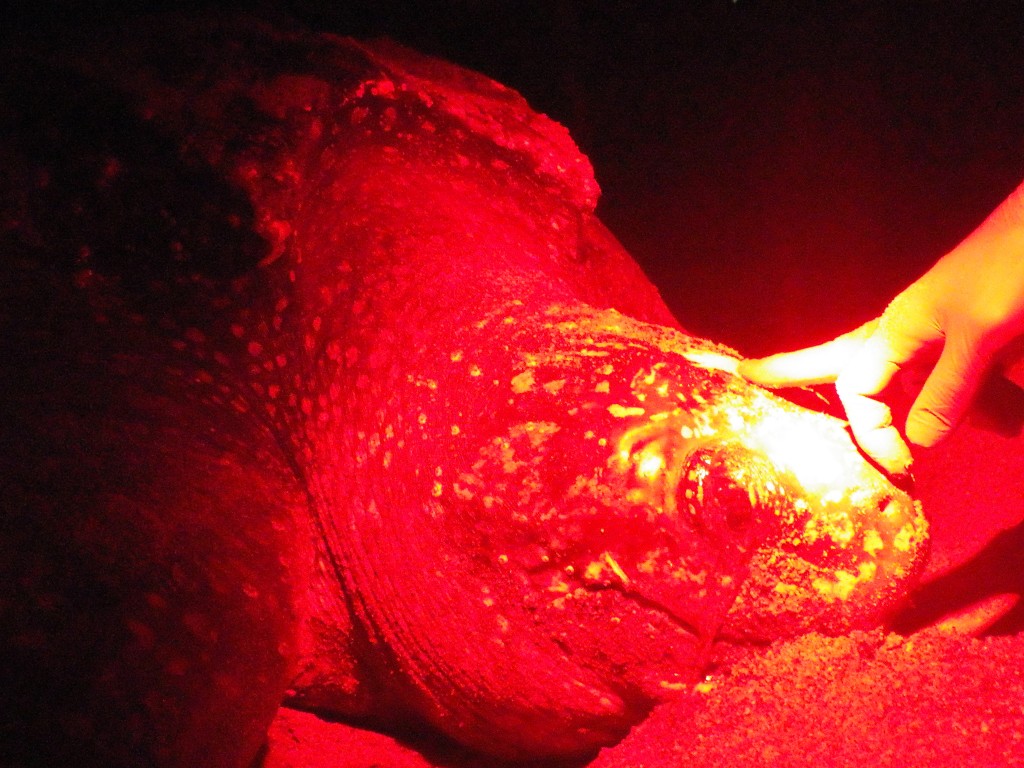 Touching a Leatherback turtle while in a trance like state

The following day we relaxed on the beach for a while and then I headed on a jungle trek with Nigel, a relation of mine, two security guards and two guides! We enjoyed a nice meal of pigs tail just before and then set off to what I was told was quite an impressive waterfall. 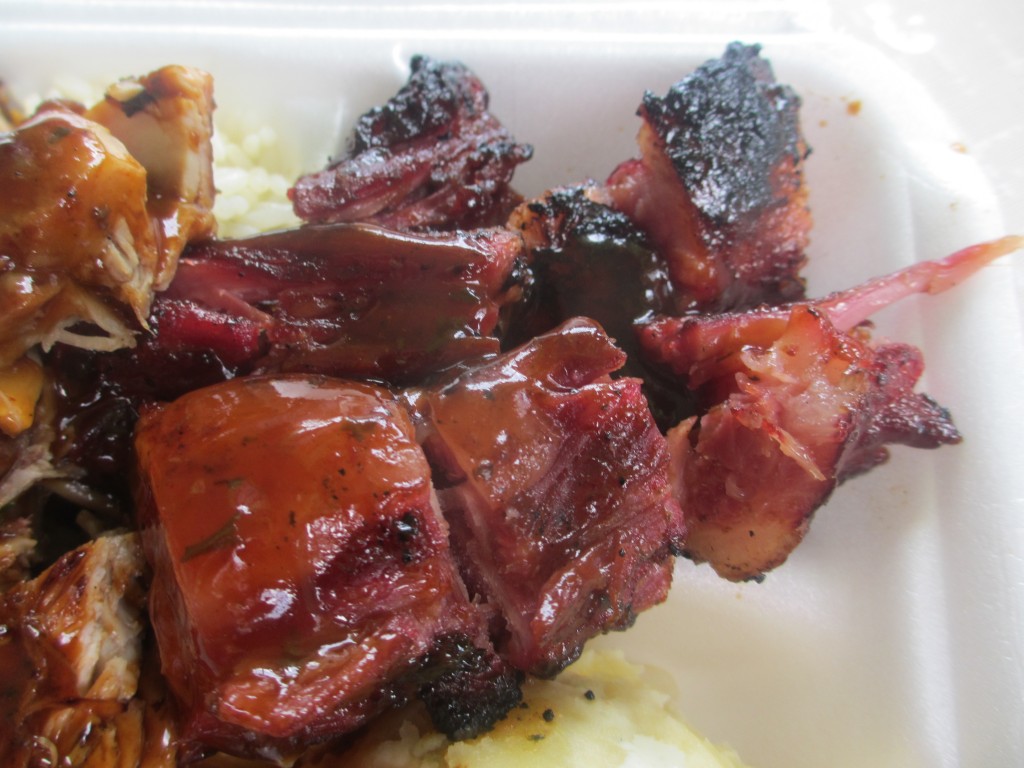 We drove for a while until the road had practically finished and we were surrounded by dense vegetation. It was here where I was told about the very poisonous Mapepire Balsain Snakes which were very active in this rainforest and that we were too far away from help if anyone got bitten… 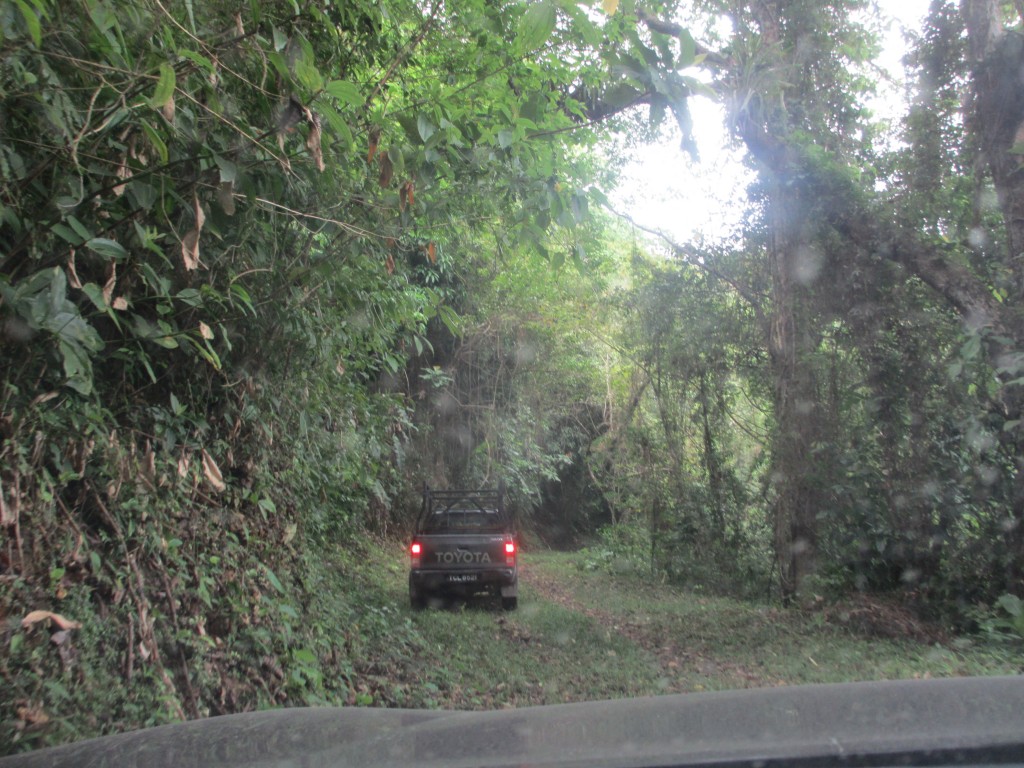 The start to our trek 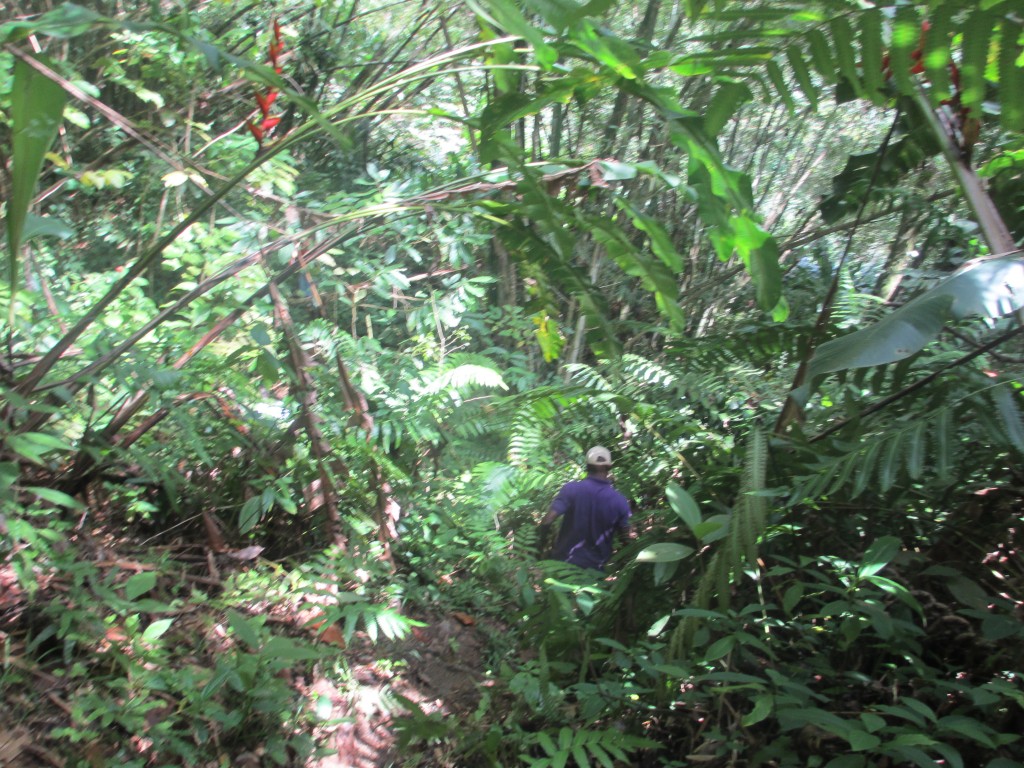 We headed down through the thick rainforest until a stream was reached through which we walked along for a while. After about 45 minutes of careful foot placing to avoid any snakes, we arrived at a fairly disappointing waterfall. I wouldn’t say it was worth all the trekking in the high temperatures but it was a good experience nonetheless. 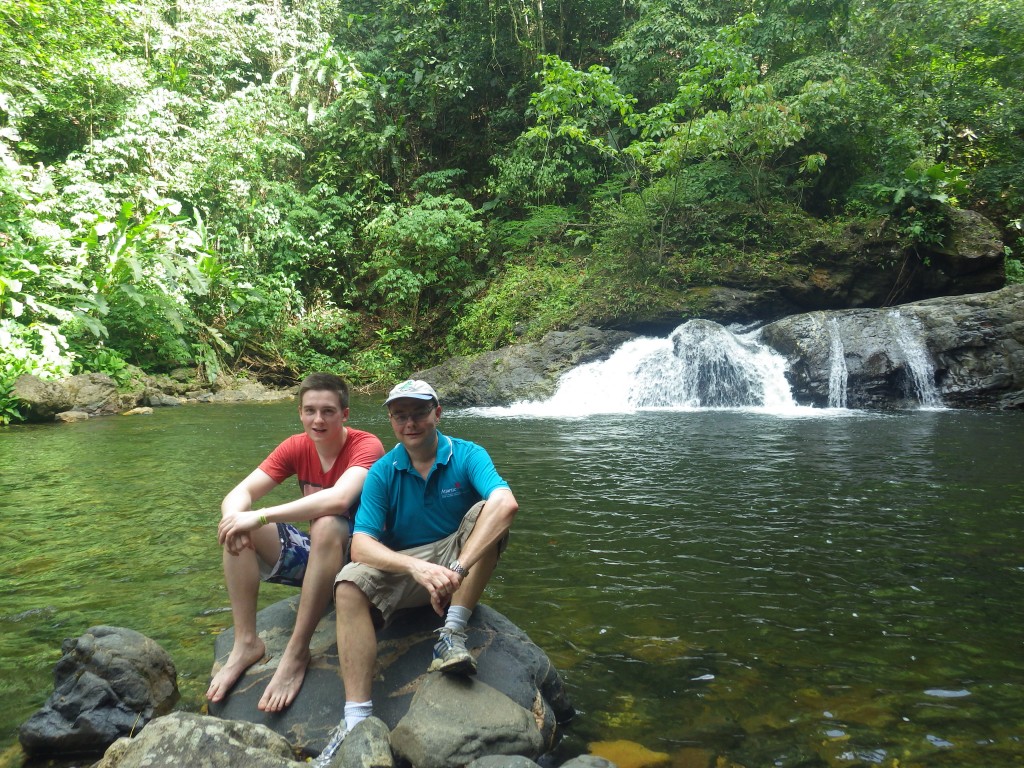 Me and Nigel at the waterfall 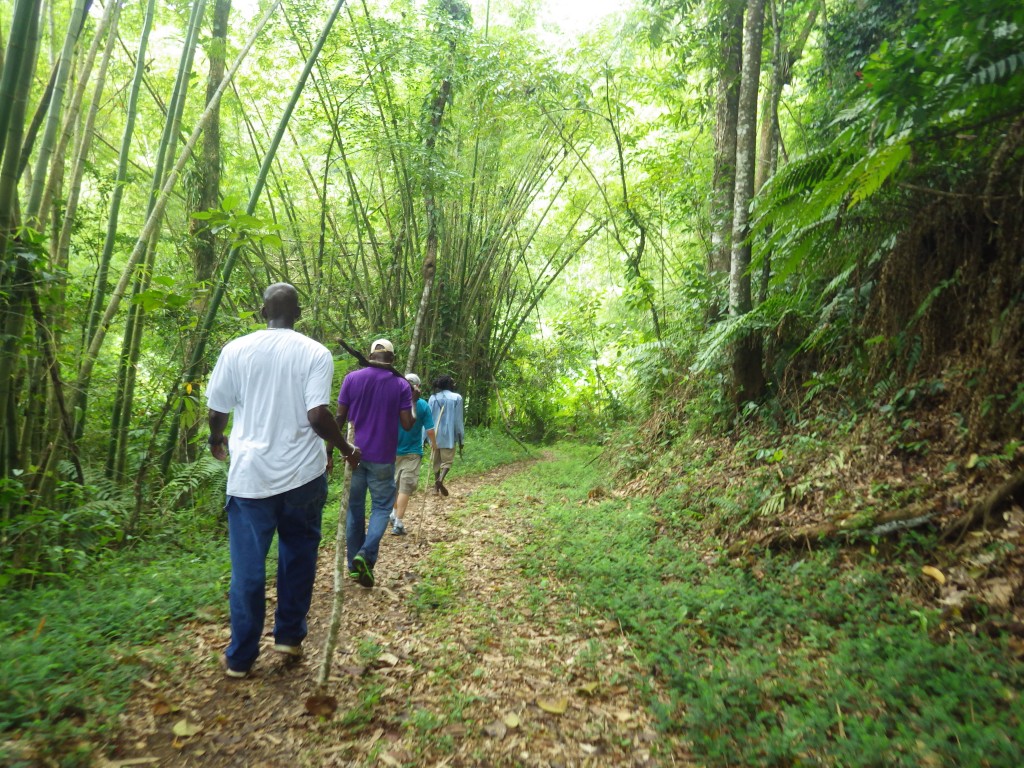 Heading back from the waterfall

We were back to Grand Riviere beach just before dusk, just in time to see hundreds of little turtles burrowing out of the sand! The baby turtles would work their way to the surface from their deep chasms by scrambling on top of each other like a ladder, so the ones at the bottom often wouldn’t make it out. The first hatchling of the day had unfortunately first been spotted by a vulture like bird called a Kobo. The poor little turtle was promptly scooped from the sand and taken off for the Kobo’s dinner; not quite survival of the fittest. Fortunately the rest of the nest hatchlings were saved from the Kobo and put into buckets by helpers for release when it got a bit darker and there were fewer predators around. 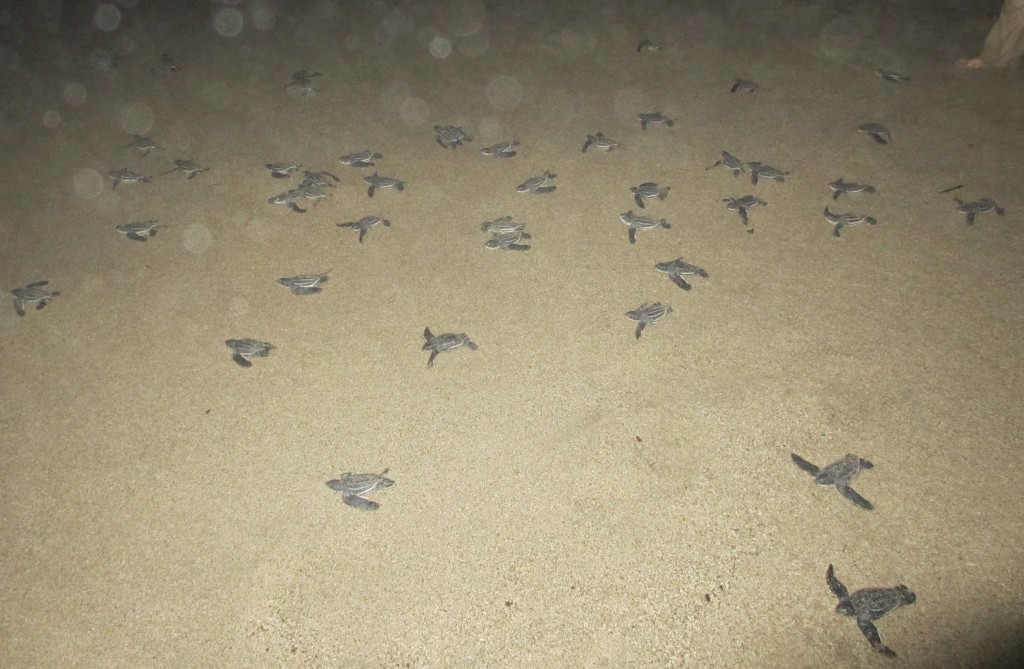 Releasing the hatchlings at dusk

For a second evening we headed out on the beach with our guide and fortunately once again the turtles were plentiful, the skies were clear and the moon was full so we could see the turtles well without artificial lighting. 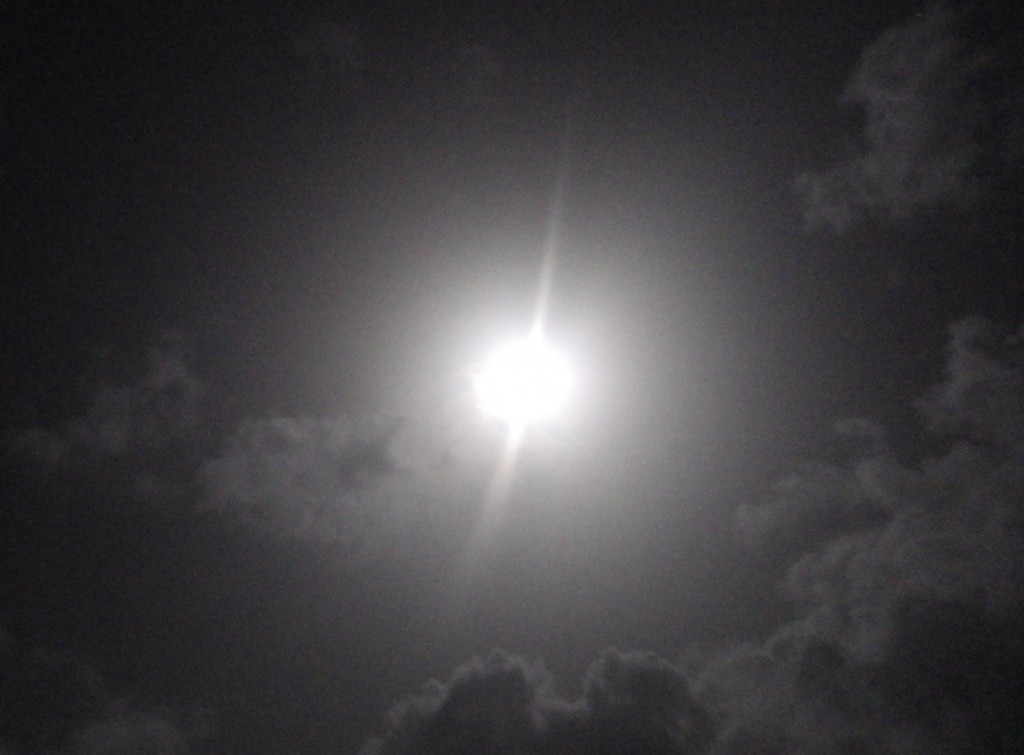 Full moon lighting up the beach

The following morning I arose at dawn with the intention of witnessing the last few turtles on the beach before the light got too intense for them. This was something I had hoped to do the morning before but had been unsuccessful; all I had seen was a glimpse of a turtle as it headed back to sea. This morning however was different, the beach was deserted of people and just up the beach we came across a monstrous turtle which was just finishing up laying. We gawked at this colossal animal as it finished covering up its nest and then clambered back into the sea; it was so much more impressive in the daylight than all those we had seen at night. 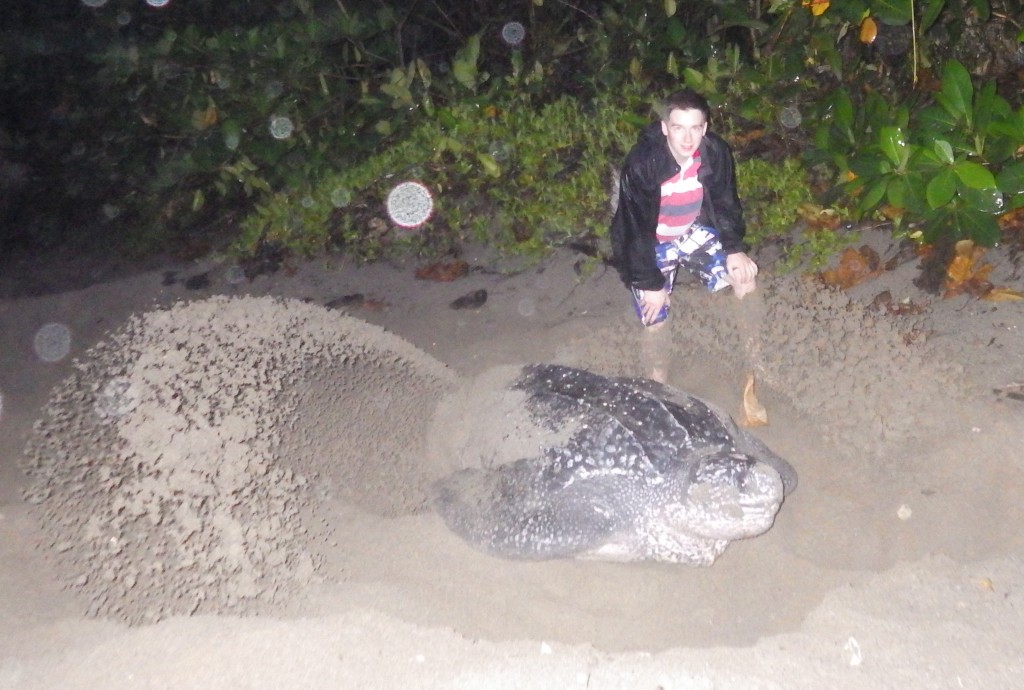 Action shot with a Leatherback 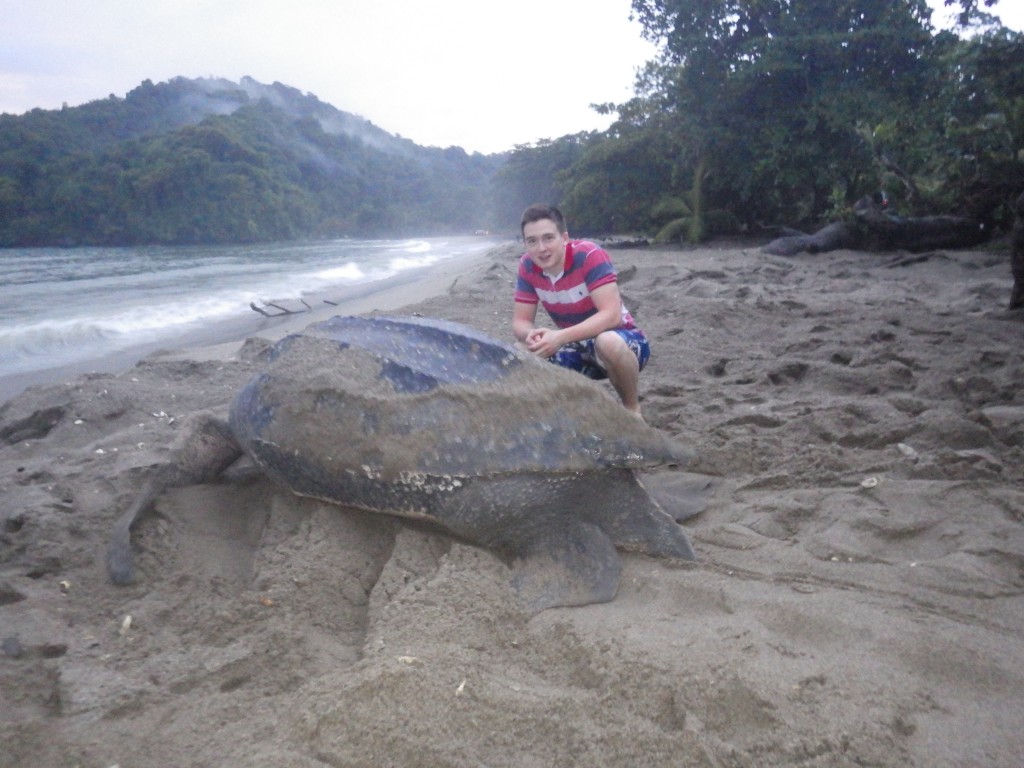 Turtle heading back to the sea

Just up the beach we came across another turtle which was slightly smaller and seemed to be stuck. It spent a long time scrambling around the same area and digging itself into hole. Just as we were about to help it, the turtle started digging a hole as though it was going to lay. However once the hole was deep enough for laying; it got clumsy with its flipper and filled part of it in, this was probably due to exhaustion. It continued to scramble around as a large audience built up, in an attempt to help it, water was poured over its face as the sun was starting to get intense. This seemed to give the turtle the encouragement it needed for it to slowly stumble back into the sea. 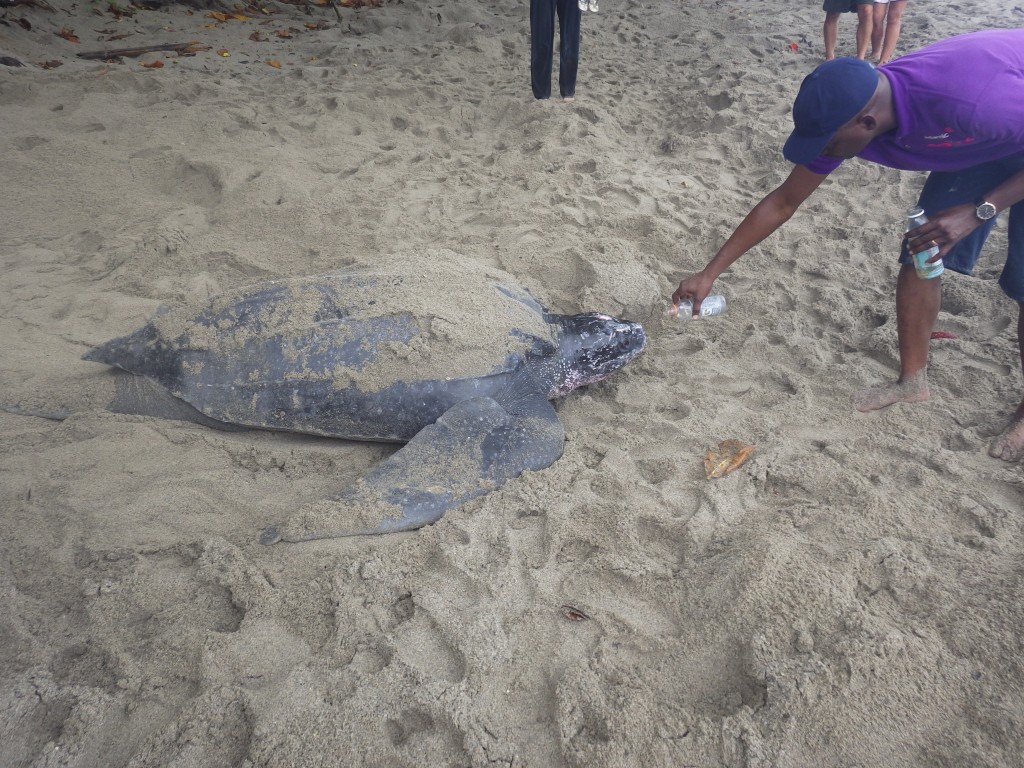 Cooling a Leatherback Turtle with water