As a budding engineer I had heard about the Itaipu Dam long before I went travelling to South America and it was certainly a place I wanted to visit while in Iguassu. It is a hydroelectric dam located on the border between Paraguay and Brazil and is the greatest hydroelectric power producing dam in the world at 98.6 TWh in 2013. The dam is jointly owned by both countries with 50% of the power going to each country; this is enough to power 75% of Paraguay and 17% of Brazil!

The dam took 10 years to build and was completed in 1984. It is 196m tall and the volume of concrete used to build it was 15 times greater than that of the channel tunnel! The dam cost UK £11.8 billion (US $19.6 billion) and I feel it rightly deserves its place as one of the seven wonders of the modern world. 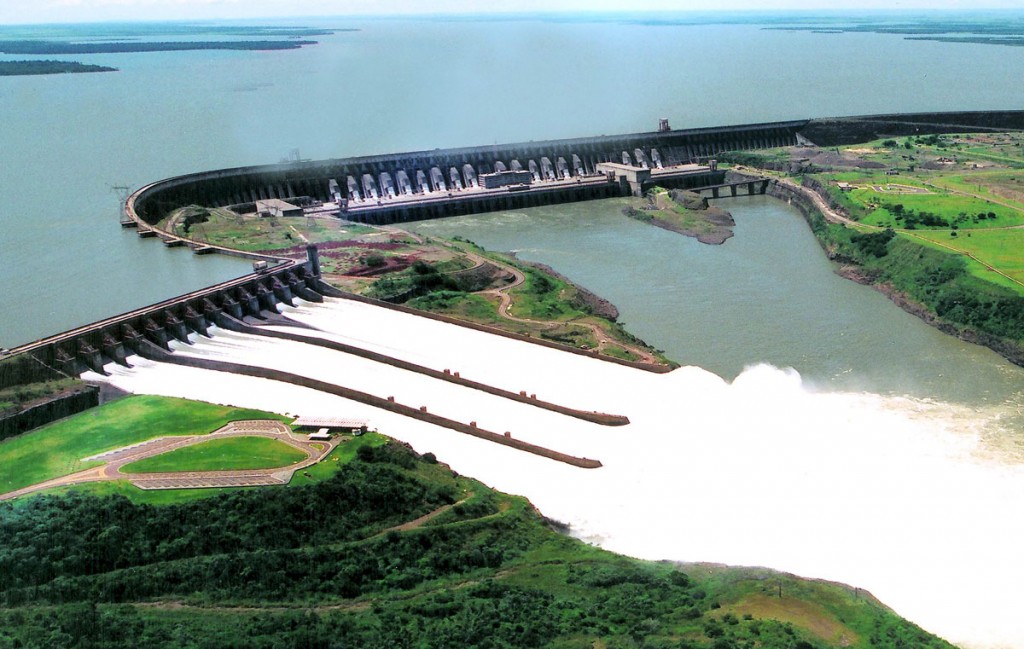 The Itaipu Dam from above

Unfortunately as a consequence of building this dam, the Guaíra Falls, which was the world’s largest waterfall by volume, was drowned by the newly formed Itaipu reservoir. The Brazilian government decided to dynamite the rock face to facilitate safer navigation thus eliminating the possibility of restoring the falls in the future. Shortly before this happened, 80 people died when a bridge overlooking the falls collapsed as tourists sought a last glimpse of the falls. 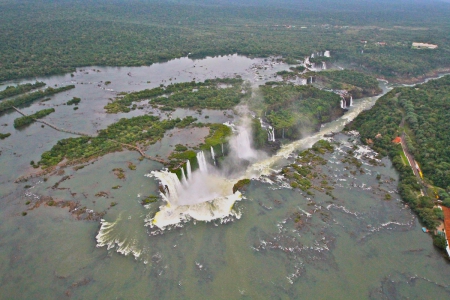 The once magnificent Guaíra Falls

To reach the dam I could catch bus numbers 101, 102 or 104 which all left just down the road from my hostel in Foz do Iguaçu , Brazil. The bus took about 30 minutes; I exited it at the entrance to the Itaipu National park and walked to the Itaipu Dam tour centre which was just alongside. 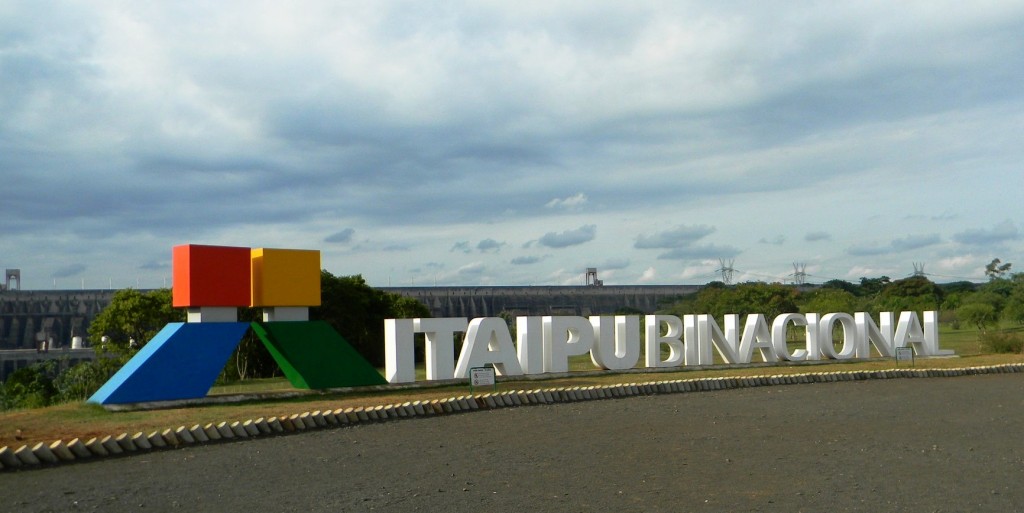 Entrance to the Itaipu Dam

The dam is very popular so I would recommend pre-booking, I had pre-booked onto the ‘special’ tour; there was also a ‘panoramic’ tour available but you don’t see nearly as much on this. These tours were R$ 64 and R$ 26 Real respectively (£17 and £7 GBP), running throughout the day, every day.

The tour took about 2 hours and 30 minutes with 7 different stops along the way. We watched a short film about the dam before setting off on the bus to our first stop which was a panoramic view of the dam. From here we could see a great view of the whole dam with huge spillways off to the left and lots of turbines further to the right. The water colour had changed to brown in the recent weeks before my visit due to immense rainfall upstream. 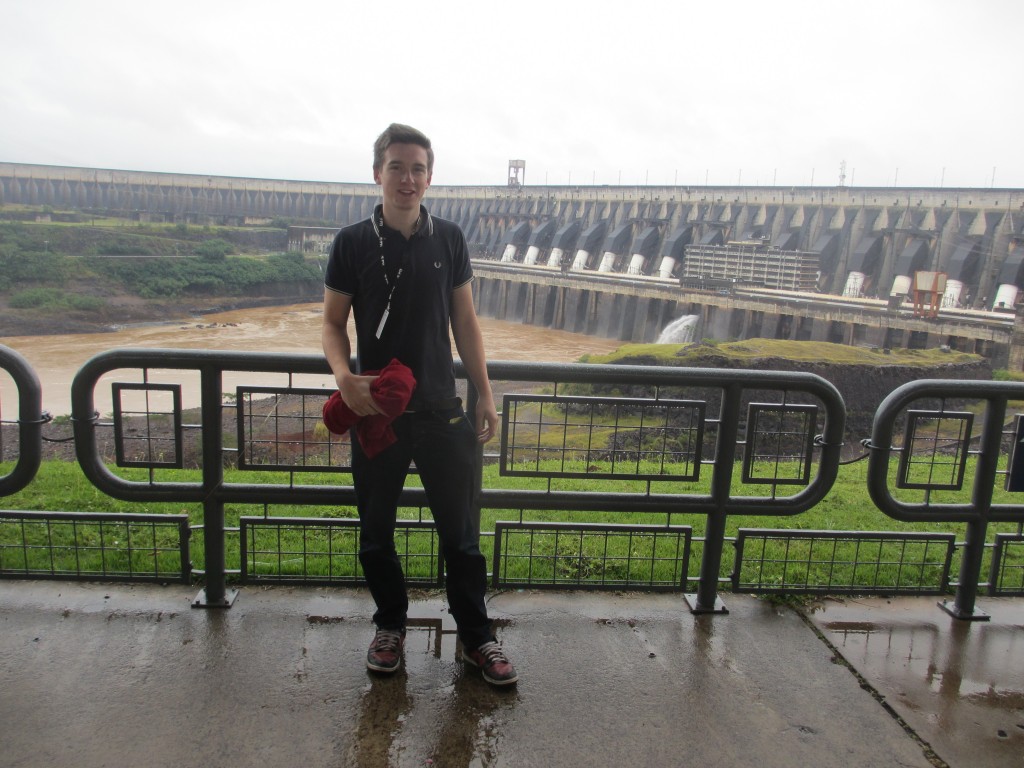 Itaipu Dam from afar, unfortunately the camera I had with me didn’t allow for panoramic shots

The bus then drove us to the top of the dam which gave great views of the surrounding area and the huge reservoir next to us. We were told not to walk any further along the dam than we were as that would be trespassing on Paraguayan land for which we could get into trouble. 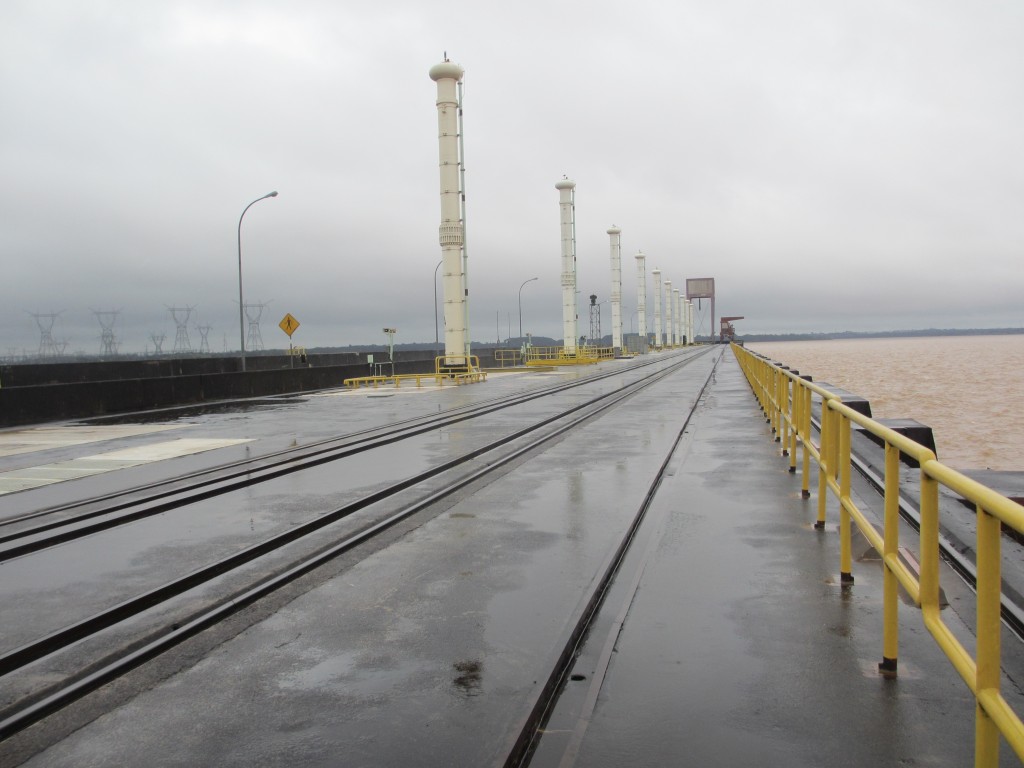 Top of the Itaipu Dam with the Paraguayan border just ahead

Next stop was inside the dam, passing the huge ducts through which 700,000 litres of water flow every second, or half the flow of the Iguassu Falls within each one! The dam is hollow so as to reduce the amount of concrete needed in its production; this enabled us to have great views of the internal castings of the dam with big drops down to the dam base. 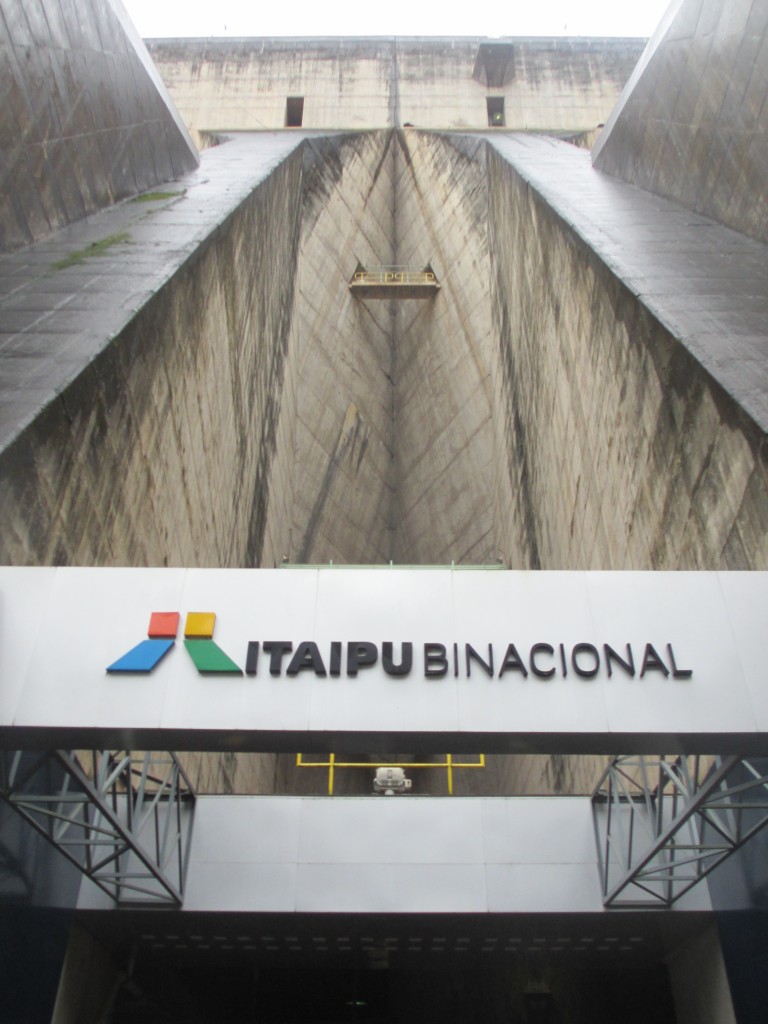 Entrance to the innards of the Dam 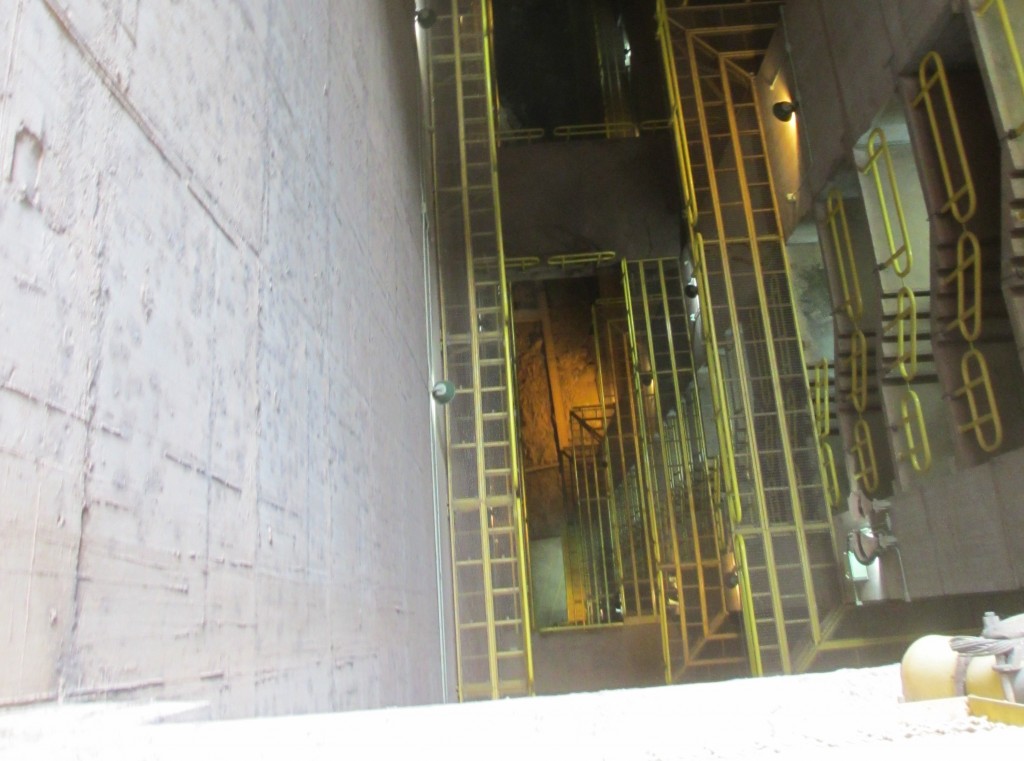 Long way down to the base of the Dam

The central command room station was the next place we headed to; we were able to cross a yellow strip on the floor which represented the border between Brazil and Paraguay. This line appeared to follow through to the control room itself where half of it controlled the Brazilian power and the other half Paraguayan power. Half of the power from the 20 generator units is generated at 50 Hz for Paraguay and the other half at 60 Hz for Brazil. As the output capacity of the Paraguayan generators far exceeds Paraguay’s requirements, most of their production is exported to the Brazilian side where it’s converted to 60 Hz.

One foot in Brazil, the other in Paraguay 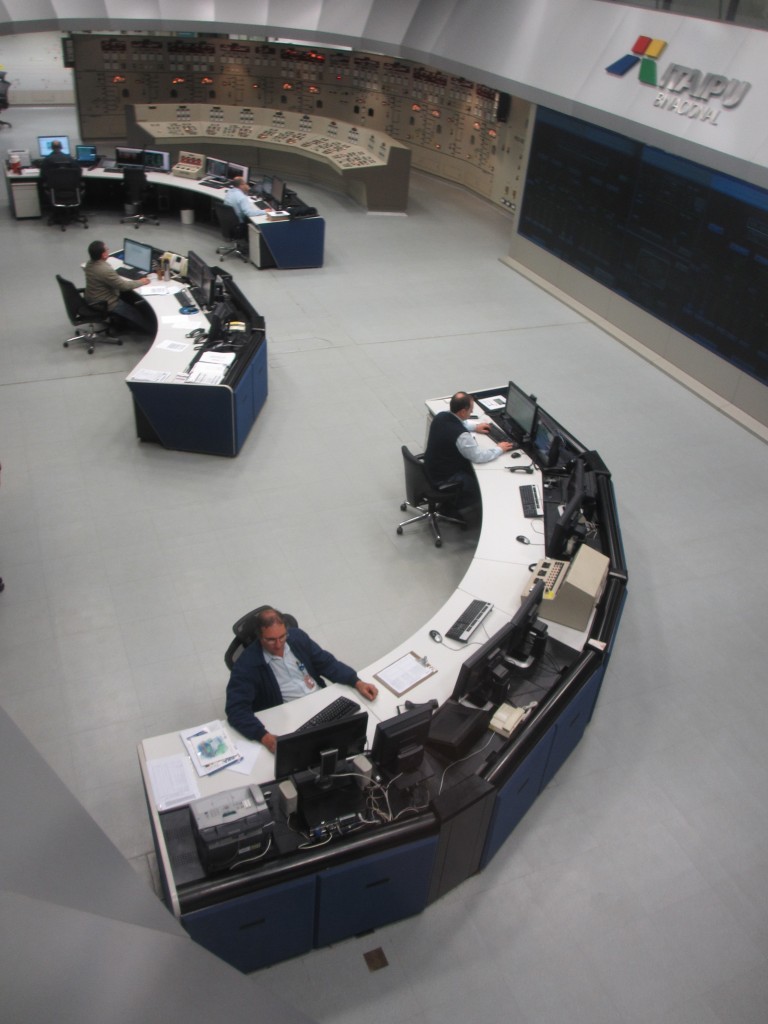 Inside of the control room we were able to see the huge turbines in action which was very noisy. Not far from here we went to our last stop which was a huge room above the turbines, the room was one kilometre long so workers used bikes or small electric cars to get around! 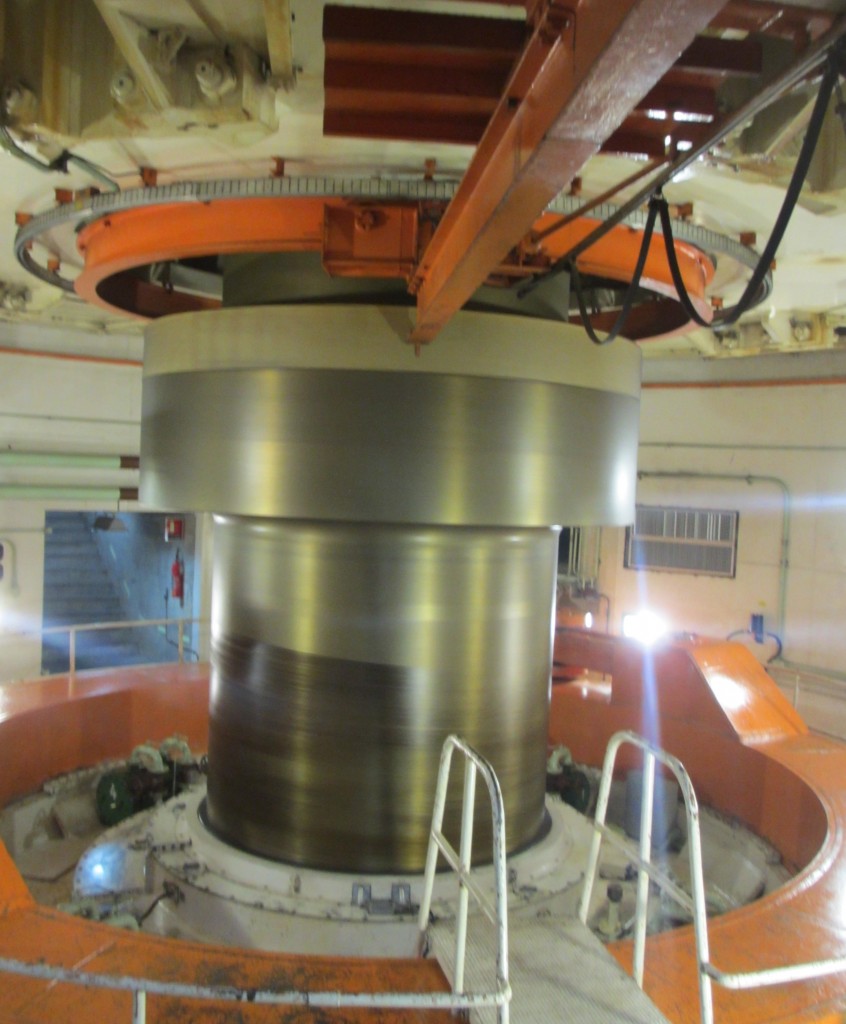 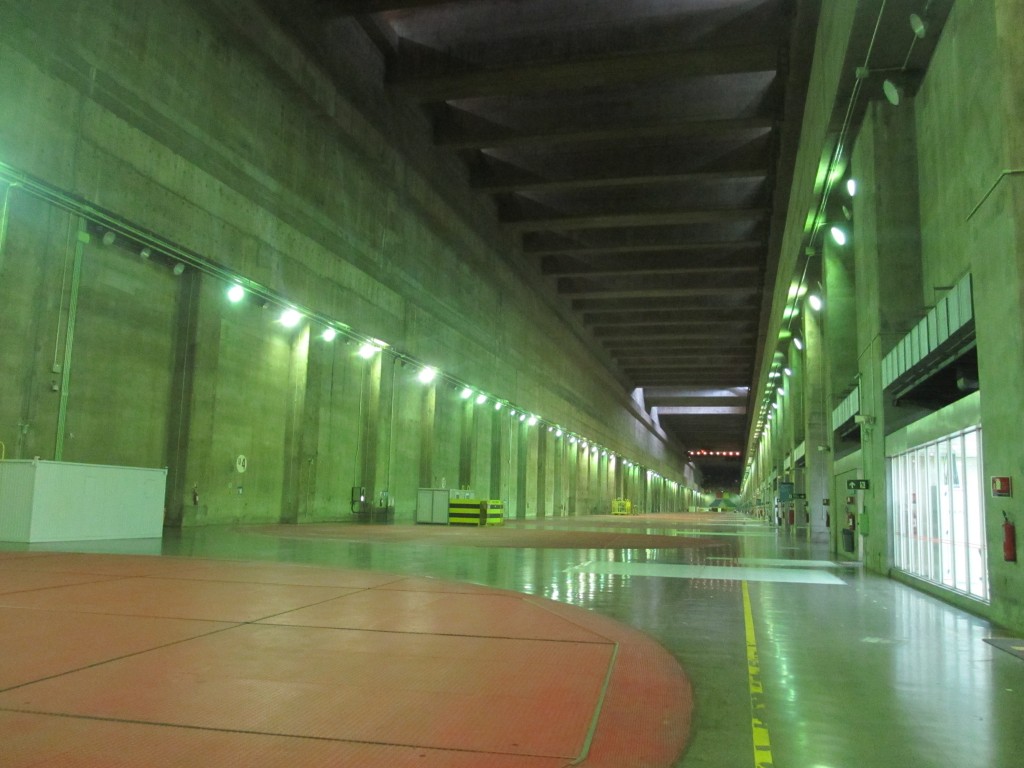