Going up to Christ the Redeemer statue is one of the top attractions in Rio De Janeiro and rightly so as it is one of the seven new wonders of the world. The statue was built to commemorate the 100th anniversary of Brazilian Independence in 1922. It was completed in 1931 and became the largest Art Deco sculpture in the world at 40 metres tall! It’s made of soapstone and concrete and weighs 635 tonnes. 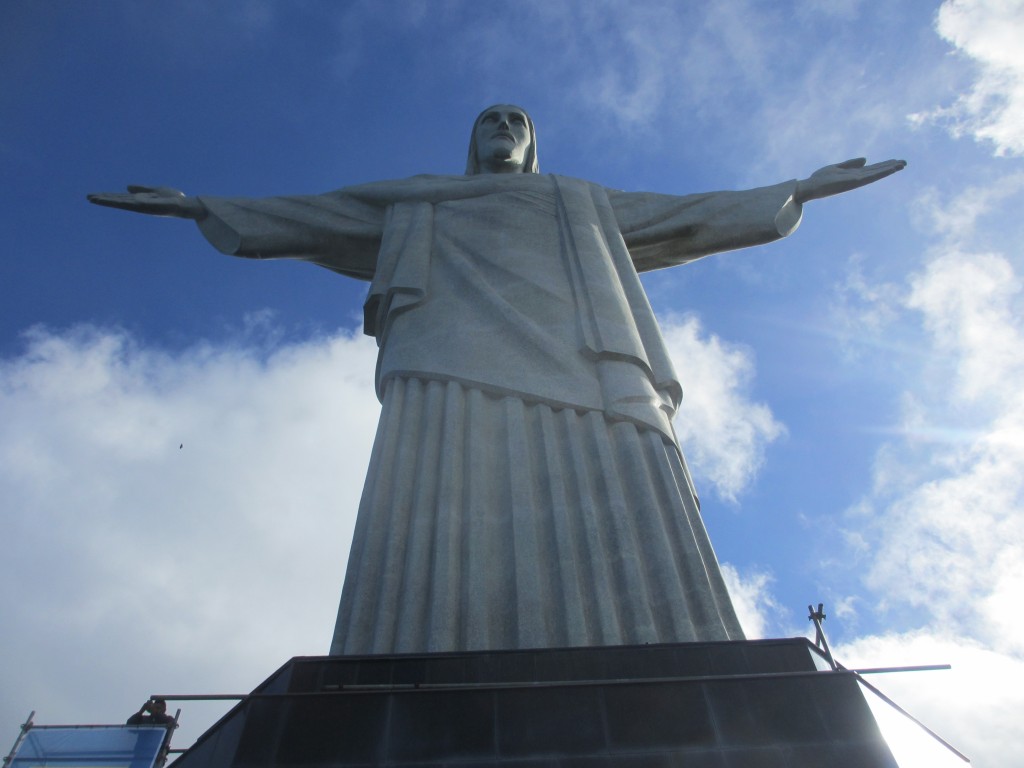 A view from the base of Christ The Redeemer

Christ the Redeemer was certainly one of the top on my list of things to do in Rio and for that reason I went to see it on my first day there. However this day was the day of the world cup final and it seemed like every other tourist had thought it would be a good idea to pop up to the Christ before the game started. This meant there were a number of very large queues to get both up and down from the statue which was a bit worrying as we didn’t want to miss any of the final game. 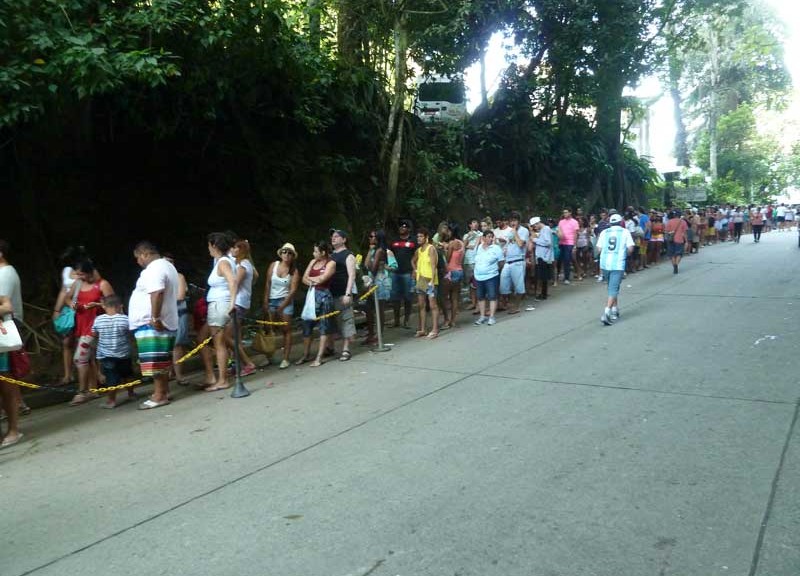 Queues to Christ The Redeemer

Getting to the statue can be quite troublesome; I was with two Brazilians from my hostel which helped a lot with the Portuguese and working out how to get there. There are five different methods to get there:

1. Tram The first and most famous method is to take the tram. This costs around 50 Real (~£13 GBP) but is often very busy so you have to make sure you get there early or to book in advance.

2. Passenger Van The second method is to take the bus service up to the bus station and then to catch a passenger van for 25 Real to reach the summit. The price of this plus the 32 Real admission is the same as the tram but doesn’t involve the lengthy wait so is often preferred. This is the method I took due to the convenience, price and the brief time I had to see the statue.

3. Walking The third way is to walk up to the summit, it is a nice walk which takes about three hours. I would recommend this if you’ve got the time.

4. Tour The fourth way which is probably the easiest but one of the most expensive is to go with an organised tour; some tours focus solely on this attraction and others visit a number of Rio attractions. This is a good idea for people who want to leave the organising up to someone else or are short of time and need to see a number of Rio sights.

5. Taxi Lastly the fifth method is to go by taxi which is also expensive but good if you’re on a tight schedule. Taxis can take you most of the way up the mountain and you can arrange for them to wait for you while you go up to the statue. Prices depend on where you start from. 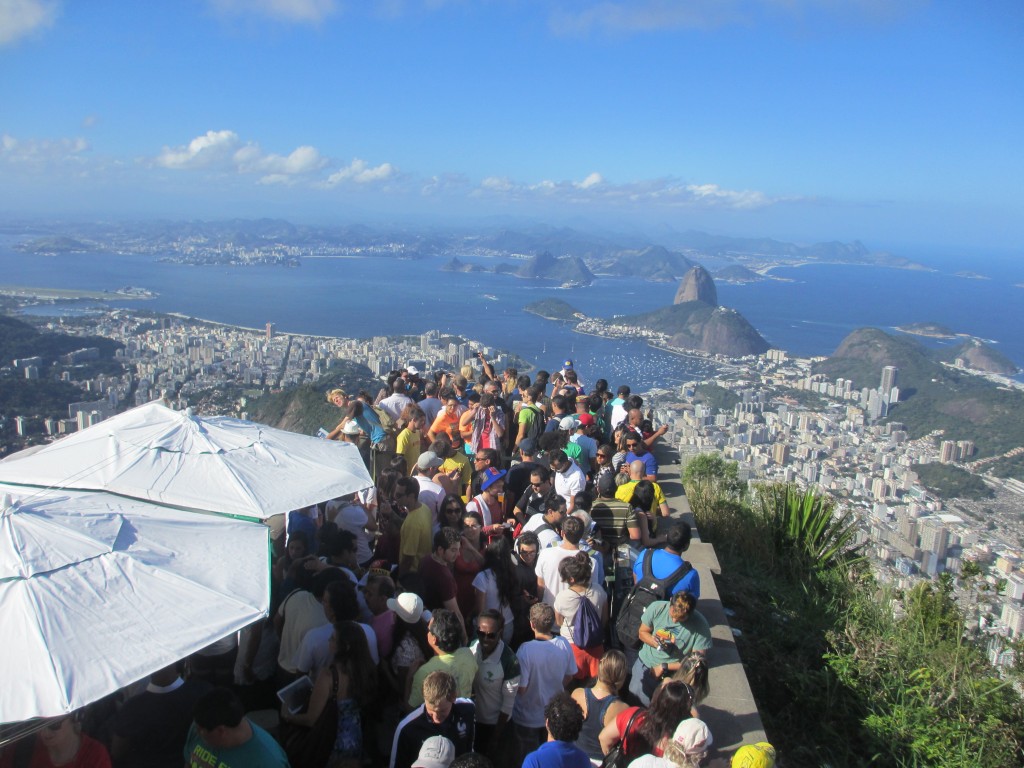 Crowded Viewing Platform At The Top

So we ended up taking the passenger van up to the statue; we first stopped at the bottom of the hill where we joined a large queue for tickets then we had to join an even larger queue for the van up to the top. Once we reached the statue it was certainly worth all the queueing, the statue and the views were both amazing. It was very crowded at the top but I eventually managed to battle through the crowds to get some good photos of the statue and views of Rio from the viewing platform. 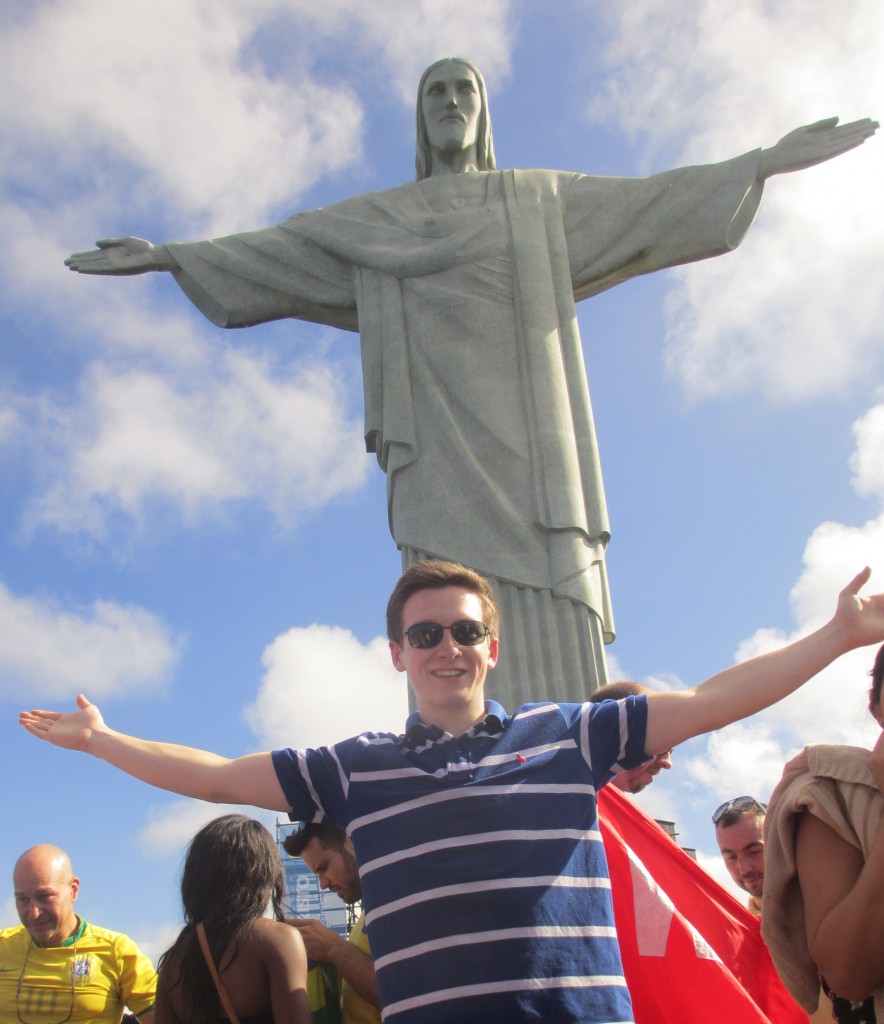 Classic tourist photo after battling through the crowds.

Heading down from the statue there was another massive queue for the vans as everyone wanted to get back in time for the world cup final, fortunately having a return ticket for the van allowed us to skip part of the queue which meant we managed to make it to Copacabana beach just in time for the start of the final! You can read more about my World Cup Final experience here.