Iguassu Falls From The Brazilian Side

The primary reason I travelled to Iguassu, like most other travellers, was to see the colossal Iguassu Falls on the Argentine/Brazilian border. These falls are taller than – and twice as wide – as the Niagra Falls and rightly named one of the seven natural wonders of the world. During the rainy season of November through March, the rate of flow of water going over the falls can reach 12,750 cubic metres (450,000 cubic feet) per second. The Iguassu Falls are divided by various islands into separate waterfalls; one of the best known is the Devil’s Throat, which is best seen from the Brazilian side of the falls. Approximately half of the river’s flow falls into this part of the waterfall. The Devil’s Throat is U shaped and 82 metres high, 150m wide, and 700m long (269×492×2,297 ft.).

Iguassu Falls, Devil’s Throat from above

On my first day in Iguassu, I decided to visit the Brazilian side of the waterfall with the plan of traveling to the Argentine side a few days later. I was told to visit the Brazilian side first as this side is slightly less impressive than the Argentine side. To reach the Brazilian side of the falls, I caught the 120 bus from Av. Jorge Schimmelpfeng in the centre of Foz de Iguacu, which left just down the road from my hostel. The hostel I was staying in was called ‘Green House Hostel’, and it is a place I would definitely recommend. It’s a lovely hostel in a great location with very friendly staff and a great social atmosphere in the evenings. They also sell great food cooked by the chef, Ed, including huge 800g Argentine steaks! 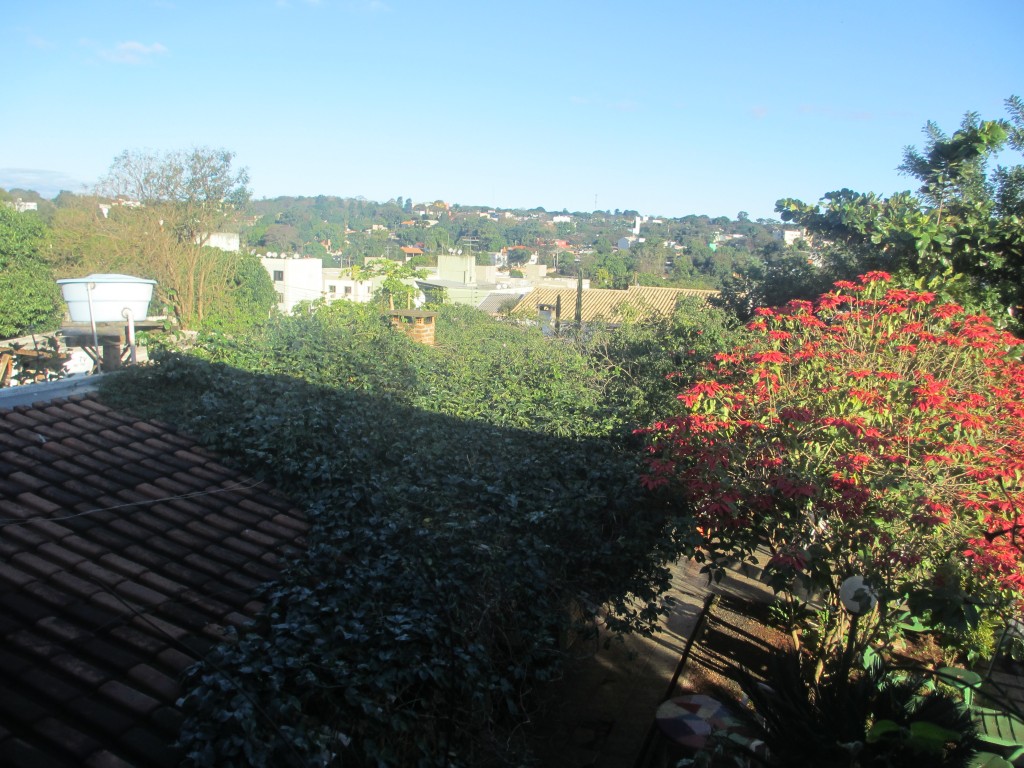 Great view from the balcony at the Green House Hostel

I visited the falls with an English couple from my hostel; the bus to the falls took about 20 minutes and dropped us off at the entrance to the Iguassu Park. Tickets were 45 Real (£11 British Pounds), which also gave us access to the bus service through the National Iguassu Park and stopped at various points along the way. There were lots of jungle paths on the route where you could see monkeys and various other animals; we got off the bus a bit further down at the first waterfall path, which gave fantastic views the whole way along. 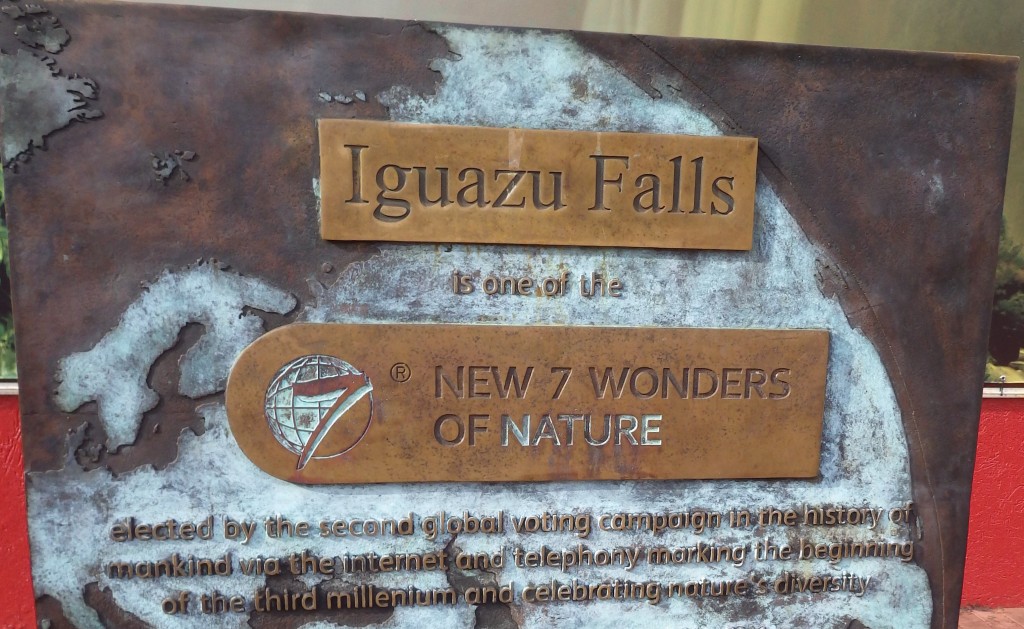 Just before we got our first view of the falls, we came across some small racoon like animals called coiti, which appeared to have infested the whole area. There were lots of warning signs to discourage us from feeding them with graphic pictures of bitten fingers. 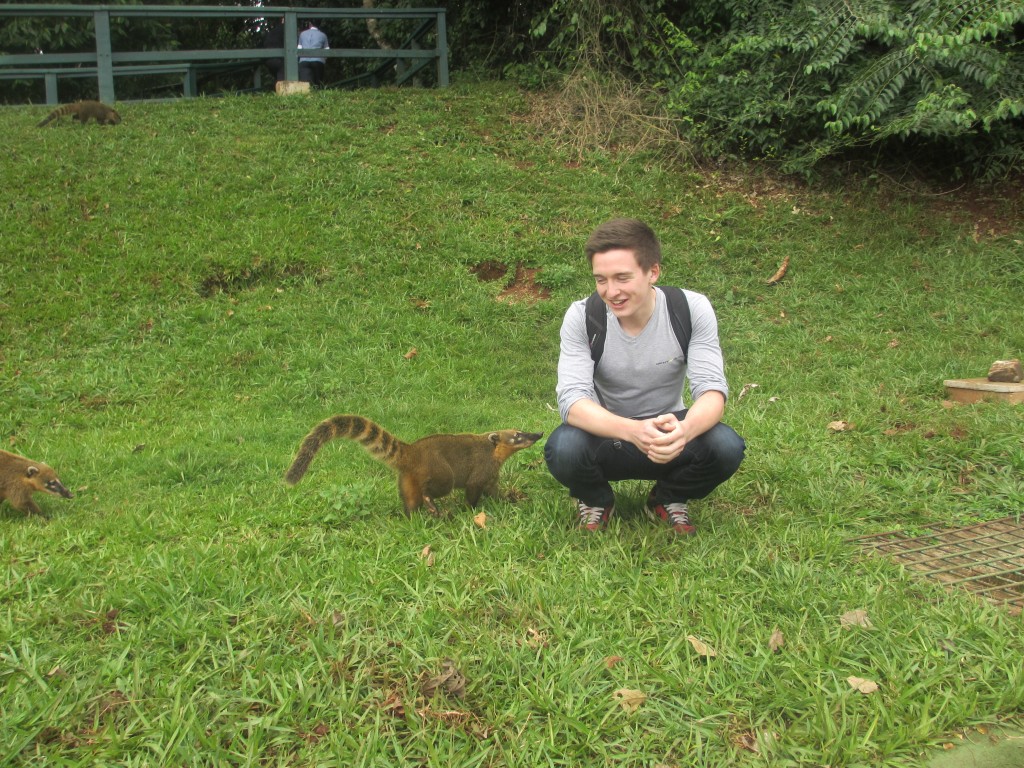 Close encounter with a Coati

We then got our first view of the falls – it was a huge and impressive beast of a waterfall. As we followed the path further around, we got closer and closer to the falls, getting wetter and wetter from the spray as we progressed. The water was noticeably browner than usual, this was due to a huge increase in rainfall which had not only changed the water colour but damaged large parts of the Argentine side (Iguassu Falls Argentine side article coming soon!). 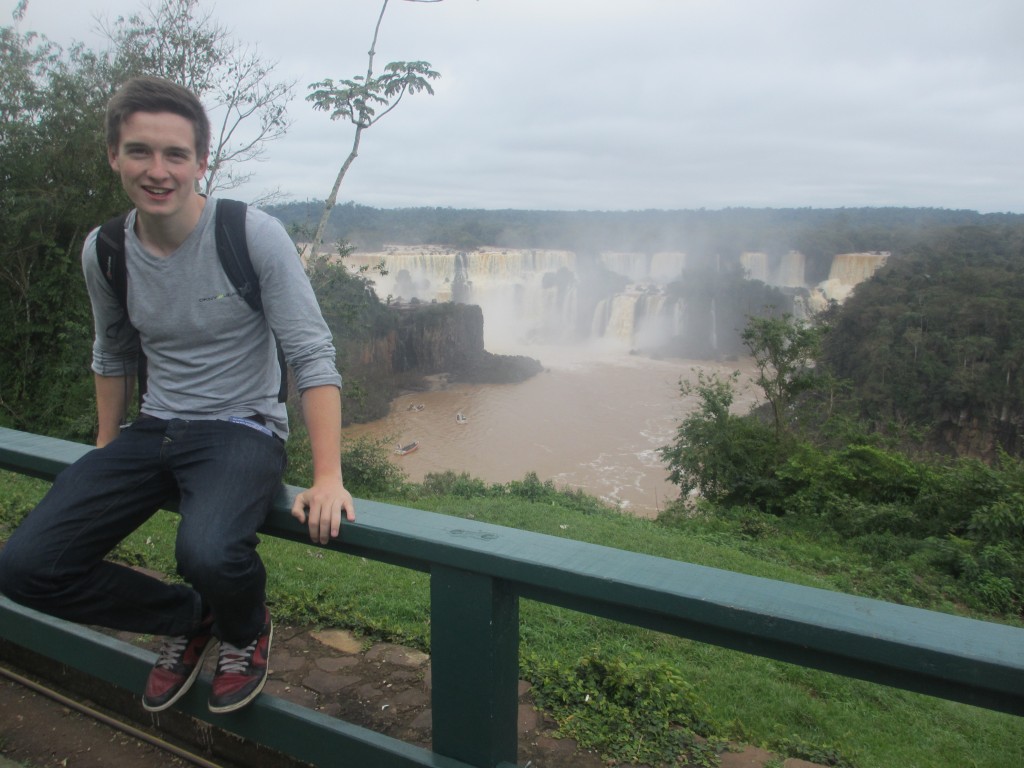 First sighting of the Iguassu Falls

We then reached a bridge that juts right into the middle of the Devil’s Throat; I would definitely recommend a waterproof outfit for this walk. The bridge allowed us to see great views of the plummeting waterfall from above … while being blasted with a strong spray from a nearby waterfall.

Walking a bit further around led to a few viewing platforms right next to the Devil’s Throat, where an elevator could be taken to the top which gave magnificent panoramic views of the Devils Throat.

Panorama of the Devil’s Throat from above, a video of this can be seen below

The bus station to exit the park was just along the top viewing platform. Upon exiting the park, I headed to the nearby bird park which was just up the road (Article coming soon!).